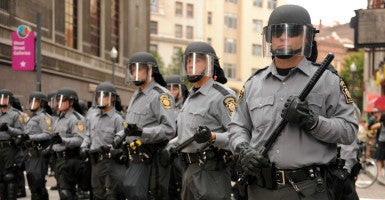 Police in riot gear stand guard during a 2009 protest against the G20 Summit in Pittsburgh. (Photo: Michael Reynolds/EPA/Newscom)

Forbidding free speech on a public sidewalk may sound to many Americans like the mandate of some foreign despot in a faraway country. Such a law exists, however, in Pittsburgh.

Oral arguments concluded Friday in the case of Bruni v. City of Pittsburgh, where attorneys with Alliance Defending Freedom appealed a federal judge’s decision to deny the pleas of pro-life demonstrators and uphold the city ordinance restricting free speech in certain public areas.

According to a press release from Alliance Defending Freedom, the ordinance upheld by U.S. District Judge Cathy Bissoon “bans free speech around the facilities of abortionists, eye doctors, dentists, and any ‘therapeutic,’ ‘healing,’ or ‘health-building’ treatment services.”

Matt Bowman, the attorney who argued against the ordinance and senior legal counsel with ADF, a Christian legal group, said the government must justify banning free speech before it can pass and uphold an ordinance such as Pittsburgh’s.

“The city of Pittsburgh didn’t put together any good reason at all why innocent people who want to engage in free speech on the sidewalk should be banned when the city could just directly police any actual problems that are occurring,” Bowman said in an interview with The Daily Signal.

Bowman said the concept of the government banning free speech is a dangerous and slippery slope:

Bruni v. City of Pittsburgh is not the first case of its kind, and if similar ones that established judicial precedent for the situation are any indication, Pittsburgh has its work cut out for it in justifying the ban on free speech.

In McCullen v. Coakley, the U.S. Supreme Court struck down a Massachusetts law that banned free speech in certain public areas. Similar ordinances were repealed or suspended in at least two other cases (Madison Vigil for Life v. City of Madison and Reddy v. Foster).

“The Supreme Court in McCullen said that when you have a ban on free speech in particular fixed parameters, the city has to show that the ban is necessary, and Pittsburgh has not done that,” Bowman said.

In an email to The Daily Signal, Elizabeth Slattery, legal fellow at The Heritage Foundation’s Meese Center for Legal and Judicial Studies, said that not only is the Pittsburgh ordinance a violation of the First Amendment, but it also is unnecessary to ensure the safety of women entering or leaving abortion clinics.

“The right to speak your mind—even about unpopular topics—is a core freedom upon which the United States was founded, and sidewalks are the quintessential public forum for peaceful speech,”  Slattery said, adding:

The Supreme Court recognized this in McCullen v. Coakley in 2014, when it ruled in favor of challengers to a Massachusetts law that also created no-speech buffer zones around abortion clinics. Just like Massachusetts, Pittsburgh is trying to shut down speech it doesn’t like by creating these buffer zones.

Slattery noted that the reasoning behind the Pittsburgh’s ordinance was similar to that of Massachusetts in McCullen, where the Supreme Court unanimously struck down the law. If individuals or groups act in an unlawful manner, the Heritage legal fellow said, Pittsburgh already has ample means of recourse.

“There’s also a federal law, the Freedom of Access to Clinic Entrances Act, that prohibits such obstruction, and of the 45 prosecutions that have been brought under the law, none of them has been in Pittsburgh,” she said.

No matter which side Americans stand on abortion or free speech, Bowman said, everyone should agree the matter should go to court:

So, even if someone isn’t sure who should win this case, free speech is important enough that it should be allowed to have its day in court. And the city has to meet some standard before it can ban speech on a public sidewalk.