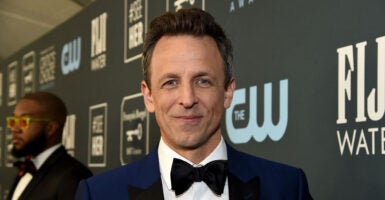 The abortion industry can always count on TV entertainers to rally to its side with all the anger and profanity they can muster. Pictured: NBC's Seth Meyers attends the 25th annual Critics' Choice Awards at Barker Hangar on Jan. 12, 2020, in Santa Monica, California. (Photo: Michael Kovac/Getty Images for Champagne Collet)

The “progressives” among us who fervently argue for abortion do not argue calmly or rationally when they are losing. As state legislators in Austin debated the Texas Heartbeat Act outlawing abortions after a baby’s heartbeat can be detected at six weeks, Planned Parenthood boss Alexis McGill Johnson accused the bill’s backers of cruelty.

“The cruelty is the point,” she proclaimed, “and we will not let it stand.”

So the abortion conglomerate that dismembers and murders over 300,000 unborn babies for money every year is accusing someone else of engaging in cruelty. It’s cruelty to object to its cruelty.

The abortion industry can always count on TV entertainers to rally to its side with all the anger and profanity they can muster. Our so-called comedians erupted in foam-flecked attacks on the conservative legislators of Texas after the Supreme Court declined to overturn this new law.

On NBC’s “Late Night With Seth Meyers,” the host bitterly complained that anti-abortion advocates don’t have a majority on the Supreme Court and said justices “don’t give a s— because they’re there for life.”

“I mean, if that’s how our government is going to work, then why not just have a f—ing monarchy?” Meyers asked.

That wasn’t the only obscene outburst on that program.

Meyers also introduced a “Minute of Fury” commentary from Amber Ruffin in which she “satirically” demanded federally funded pedicures if the government owned her body. She lectured: “So don’t take charge of the biggest decision I’ll ever make in my whole life when you can’t even get me a g–d— pedicure.”

On TBS, “Full Frontal” host and feminist Samantha Bee shook her fists at the Supreme Court.

“If you’re taking away our reproductive rights, at least own that you’re gutless monsters,” Bee said. She called the Supreme Court’s conservatives an “anti-p—y posse.”

The cultural elite gravitate seamlessly from being “sex positive” to negating pregnancies. Bee wants America to be just like her native Canada, where you can get an abortion at any moment over nine months and government will pay for it, too.

On HBO’s “Last Week Tonight,” British import John Oliver not only raged at American legislators and judges but at his own employers at AT&T. The left is so domineering that it now insists every corporation must threaten politicians who oppose abortion. Every company is supposed to wage cultural war, and if the casualties are all under the age of birth, then so be it.

Oliver told his audience that he demanded answers from the people who pay him an estimated $8 million a year. They said they haven’t taken a public position on abortion. How dare they!

“Listen, not taking a stance on this issue right now is taking a stance,” Oliver lamented. “And both-siding abortion isn’t really the PR slam dunk that they seem to think it is. Although it is certainly on brand for them. AT&T clearly likes their public statements the same way that they like their cell signal: Hilariously f—ing weak.”

Moments like these make you wonder why on Earth the liberals at the Peabody Awards gave Oliver’s show a “rare second” award “for crafting a form that pushes both comedy and journalism in new, fresh, and publicly important directions.”

This is not new or fresh. This is not comedy. This is not journalism. It’s just lobbying. It’s in-your-face liberalism, which the Peabody folks have applauded repetitively as a “publicly important direction.”

It’s so “publicly important” that you’re not allowed to be neutral about it. The babies have to be sacrificed on the altar of “anti-cruelty.”