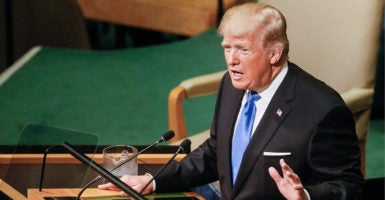 The Trump administration has an unequivocal stance on abortion, both nationally and internationally: It is a definitive “no” to policies and programs that undermine the right to life of the unborn.

This was made clear by U.S. officials at a major meeting recently hosted by the United Nations Population Fund, the abortion-centric arm of the U.N. bureaucracy.

Since the meeting ended on Nov. 14, 48 U.S. members of Congress have come out in support of a resolution recognizing the Nairobi Summit and reaffirming the United States’ commitment to “sexual and reproductive health and rights,” meaning abortion rights.

This is a blatant attempt by U.S. legislators to undermine the Trump administration and endorse a process that it expressly rejected.

The Nairobi Summit called for countries to make commitments to “sexual and reproductive health and rights.” Staging the event in Africa was by no means an uncalculated choice. It sent a clear and inherently divisive message to a continent where abortion is not celebrated, and remains heavily restricted.

It was evident in the lead-up to Nairobi that this was a faux U.N. conference, designed to create the artificial perception of consensus on abortion rights where none exists. It was scheduled to mark the 25th anniversary of the Cairo Summit in 1994, which first introduced many of these topics to the international arena.

The Nairobi Summit was an attempt to leverage the U.N. name despite a lack of consensus. It conveniently lacked participation from the full U.N. body of membership, allowing abortion advocates to push through a radical agenda without having to win support from countries that oppose it.

While many countries chose simply not to attend, the United States sent a delegation with the express purpose of rejecting the summit’s outcome. Ten other countries joined the U.S. in delivering a joint statement of rejection.

The statement made clear that the coalition does “not support references in international documents to ambiguous terms and expressions, such as sexual and reproductive health and rights.” The statement also noted that “there is no international right to abortion.”

The coalition expressed serious concerns about transparency in the way that the summit was run. It noted that registration criteria was applied in a discriminatory way—a subtle reference to the conservative groups who were barred from attending.

It also noted that for Nairobi, “only a small handful of governments were consulted on the planning and modalities of the 2019 Nairobi Summit.” As a result, “outcomes from this summit are not intergovernmentally negotiated … [and] should not be considered normative.”

The coalition later reiterated this rejection by stressing that the summit does not have “consensual weight or standing amongst governments.”

The current resolution being put forward in Congress fundamentally contradicts not only the U.S. position on Nairobi, but also the consistent pro-life stance that the U.S. has promoted at the U.N. throughout the current administration. It explicitly calls for “abortion care” and “a bold vision for comprehensive sexual and reproductive health and rights,” among other things.

Other high-level U.S. elected officials have spoken out against Nairobi and in support of the official U.S. position.

In The Wall Street Journal, Rep. Chris Smith, R-N.J., stressed the summit’s illegitimacy, stating that “the Nairobi Summit isn’t a true reflection of the [International Conference on Population and Development] but a gathering of like-minded individuals and organizations departing from the Cairo consensus as they promote a pro-abortion agenda while attempting to exploit Cairo’s name and reputation.”

Similarly, U.S. Ambassador to Kenya Kyle McCarter criticized Nairobi and stated that “U.N. organizations should not overstep their mandates and undermine the hard-fought inter-governmental consensus of governments.” He cited the president’s September General Assembly speech, in which he said “[g]lobal bureaucrats have absolutely no business attacking the sovereignty of nations that wish to protect human life.”

In that speech, President Donald Trump went on to say that, “we in America believe that every child, born and unborn, is a sacred gift from God.”

While debate over abortion in the U.S. rages on at all levels of state and national government, it is important to remember the current administration was elected on the pro-life stance it is now advocating.

In light of this, the congressional resolution should be rejected outright for attempting to impose non-consensual U.N. norms on the American people.