The Cozy Relationship Between Big Business and Climate Change Activists 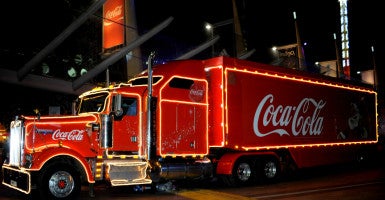 Why are some big companies—outfits like Walmart, Apple, Google, Costco, Bank of America, Best Buy, and Coca-Cola—lining up in support of the administration’s efforts to reach an international agreement to cap and cut greenhouse gas emissions? (Photo: Marc Larkin/LFI/Photoshot/Newscom)

Polls bear it out: When it comes to climate change, the world isn’t much interested in taking action. Most folks, it seems, are reluctant to embrace expensive, lifestyle-changing, ineffective “solutions” to a non-evident problem.

But some big companies are gung-ho about “fighting” climate change. Well, at least they’ve jumped on the Obama administration’s climate-treaty bandwagon, backing an as yet unwritten pact to be hammered out next month in Paris.

Big Business knows that when the deal’s going down, you’ve got to grab a seat at the table to protect your interests. That’s especially true when you know the deal will impose job-killing, growth-stunting regulations: sitting at the table, you can make sure they’re crafted in a way that will damage your competitors—domestic and international—at least as much as they wound you.

Market share matters to Big Business, but most people aren’t interested in absorbing damage in the name of climate change. And that holds true for people in the developing world who, the Obama administration constantly claims, will be hurt most by climate change.

The United Nations “My World” survey asks people around the world to identify the issue that matters most to them. More than 8.58 million people responded to the latest survey, and “action taken on climate change” came in dead last—both overall and among those countries ranked lowest on the Human Development Index.

In the United States, the level of concern is similar. Earlier this year, a Pew Research Poll found that action on climate change ranked twenty-second out of twenty-three on the list of public policy priorities. Only global trade ranked lower.

The lack of urgency is understandable. Though the climate has changed, it always has. And the threat does not appear to be as clear, present, and catastrophic as the federal government makes it out to be. Observed data have proved that the climate models the government relies on to justify regulations restricting the use of coal, oil, and natural gas run too hot, predicting more warming than has actually occurred.

More problematic, the proposed “solutions” will do little, if anything, to mitigate global warming. The far more profound effect will be to raise energy costs, reduce economic output, and lower levels of prosperity in both developed and developing countries.

So why are some big companies—outfits like Walmart, Apple, Google, Costco, Bank of America, Best Buy, and Coca-Cola—lining up in support of the administration’s efforts to reach an international agreement to cap and cut greenhouse gas emissions? Several reasons present themselves, none of them good for American households.

Because conventional fuels produce the overwhelming majority of power for the world, a treaty forcing cuts in carbon emission will inevitably raise energy prices and the cost of doing business. If an international agreement imposes these restrictions on other countries, businesses will see it as “leveling the playing field.” They will also claim that it provides them with certainty.

But the only certainty here is that those higher costs will be passed on to consumers. The real bottom line is that everything we pay for, whether it’s made here or abroad, will cost more.

The best way to level the playing field and create business certainty is for policymakers to reject climate regulations altogether. If businesses want to be climate-conscious, invest in renewable energy, or invest in more energy-efficient technologies, they should do so on their own, not be forced into it.

Another reason Big Business may support domestic and international climate regulations is that it disproportionately hurts smaller businesses. Climate regulations are one of many problematic policies harming small business growth and entrepreneurship in the United States. Big businesses that have a seat at the table can negotiate for exemptions and exclusions and can more easily manage higher energy bills.

On the other hand, small businesses are largely left out of this special interest game. Instead, they face the same higher prices for energy and other products as homeowners. This makes it harder and harder for Main Street businesses to compete against the mega-corporations.