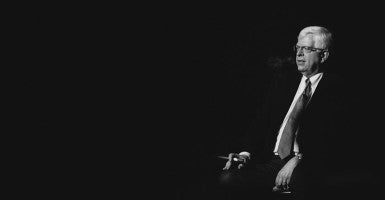 Radio host Dennis Prager and his business partner Allen Estrin had a big problem on their hands.

It was October, 2013. Several years earlier, the duo—friends for decades—co-founded PragerU, a small digital university for conservatives with a modest audience. Now, a stranger was suing them.

The man, a photographer in Ireland, alleged through a Houston lawyer that PragerU had used one of his photographs in an online educational video without his consent.

“We had a visual style that used photographs, and someone really almost out of nowhere sued us for the use of a photo,” Estrin recalls in an interview with The Daily Signal. “As a result of being sued, we did a lot of investigation into [how you can] use photos on the Internet, and the copyright ramifications of photos, and what to do going forward.”

What Estrin and Prager did was overhaul their entire visual video aesthetic to a streamlined, animation-based model, abandoning four years of work and 80 educational videos.

“And in one of those things that doesn’t happen very much in life but I’m happy to say I’ve experienced, this very traumatic experience was the best thing that could have possibly happened to us,” Estrin says. “This year we will have more than 50 million views as confirmed by YouTube and Facebook,” Prager says in an email to The Daily Signal, adding that “the largest single demographic of our videos are people under 35 years of age.”

PragerU also has 1 million subscribers to its videos across platforms, including a digital newsletter, Estrin says.

Prager, who already had a loyal radio audience, says such access is exactly what the partners hoped for when they launched PragerU.

“With the birth of the Internet, the ability to influence even more people—especially young people—opened up,” he writes.

“The new visual style, people were much more receptive to it,” he says. “We did a whole new website, and we went to a very organized release schedule, releasing a new course every Monday. And we started to see very big numbers.”

Today, PragerU focuses on that same aesthetic, primarily shooting and producing short, five-minute animated videos released every Monday. The videos explain complex political and social issues to a decidedly distracted audience and are promoted online by an internal marketing machine.

A sampling of most-viewed videos include an explanation of the “Middle East Problem” narrated by Prager, a summary of modern art as told by artist Robert Florczak, and a look at tax reform narrated by actress Carolyn Hennesy.

A 501(c)(3) nonprofit, PragerU isn’t able to comment on one large arena within modern political debates: the 2016 election and candidates.

Obviously, you know, if you have somebody driving a motorcycle backward off a cliff or something you can get a lot of views, but George Gilder talking about why capitalism works, or Robert George talking about why we’re losing our liberty, that’s serious stuff. And we have built a very strong, very loyal student body, let’s call it. A large piece of PragerU’s mission is to combat what the organization sees as a liberal bias at American universities, changing minds on issues as well as equipping individuals who already identify as conservative with information.

“I went to UCLA, I grew up in California, and everybody around me is on the left,” says Marissa Streit, PragerU’s chief operating officer. “The mission of Prager University is to arm people who are on our side with the intellectual ammunition they need to respond to these arguments, and to make the arguments really, really simple, so you don’t have to be a genius to understand them.”

Streit says PragerU also works with about 3,000 educators across the country, allowing them to use the videos in classrooms at public and private schools or in homeschool programs.

“What other choice do we have?” she says. “If this person is going to be given a 300-page-long book, they will not read it. Can you explain an entire book in five minutes? Probably not. But you can extrapolate the key, important ideas in that book.”

Streit notes that most viewers watch roughly three minutes of the five-minute videos before moving on.

A quick glance at PragerU’s video library may leave some viewers wondering about sourcing; the videos don’t cite the origin of statistics or the retelling of historical events.

Estrin says this is because the videos tend to be narrated by experts who have written books or position papers on the subject at hand. Viewers know they can seek out additional information, which is PragerU’s ultimate goal anyway, he says.

“The individual does the rest,” Estrin says, adding:

No one watches one of these courses. If you watch one, you watch two, three, four. At this point, we now have over 100 videos. If you were to sit down and watch 20 in one go, you would be shocked at how much you would learn.