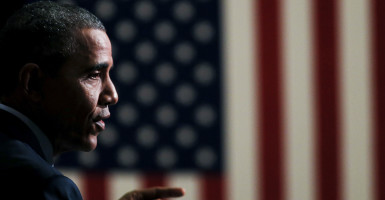 President Barack Obama announced a string of proposals Monday to help former inmates reintegrate into their communities in the latest extension of the White House’s push for criminal justice reform.

Following a visit to a drug rehabilitation center in Newark, New Jersey, Obama unveiled small steps aimed toward easing the transition from prison to society, including $8 million in federal education grants for those formerly incarcerated.

Obama is also directing the Office of Personnel Management to modify its rules to delay inquiries into criminal histories until later in the hiring process so that individuals with a record have a chance to move past the first step.

While the president cannot fully “ban the box” on job applications asking about prior criminal background, he encouraged Congress to continue to pursue legislation that does so for federal agencies and contractors so that people who have served time are not automatically barred from those positions.

He said that too often, criminal records prevent individuals from getting a foot in the door.

“We can’t dismiss people at hand simply because of a mistake that they made in the past,” Obama added.

The president also announced grant programs to give former inmates job and tech training, including a program based in the nation’s capital that will train and place 200 individuals with prior convictions in tech jobs.

The White House also released new guidance for the Department of Housing and Urban Development on using arrest records in background checks for federal housing, making it easier for former prisoners to apply.

The announcement builds upon the rare bipartisan coalition forged over the last few years after incarceration rates exploded following a “tough on crime” push in the 1980s that put in place harsh sentencing policies.

Currently, 2.2 million people are in U.S. prisons or jails, resulting in $80 billion spent on incarceration every year.

Of those, roughly 600,000 individuals are released back into society. Obama said given this number, policies and programs that help former inmates put their lives back on track “promote[] not only justice and fairness, but also public safety.”

John Malcolm, director of The Heritage Foundation’s Meese Center for Legal and Judicial Studies, said while the full details remain to be seen, the president’s actions Monday seem to be a “step in the right direction.”

He said given that 95 percent of those who are presently incarcerated will ultimately be released, the U.S. should focus on equipping former inmates with the skills and stability needed to help them become “productive members of society.”

“It is in all of our interests to make sure that these individuals are able to develop positive associations, live in a stable environment, and earn a living through gainful employment,” he said. “If not, it is highly likely that many of them will return to a life of crime, continue to pose an ongoing threat to public safety, and end up back in prison.”