Arizona’s Obamacare Co-Op to Shut Down After Receiving $93.3 Million From the Government 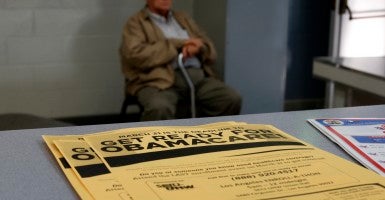 Meritus Health Partners, a co-op in Arizona, announced Friday it would be closing its doors. The co-op is the 11th of 23 created under Obamacare to shutter. (Photo: Lucy Nicholson/Reuters/Newscom)

Two days before the start of Obamacare’s open enrollment period, a nonprofit health insurance provider located in Arizona announced that it would be closing its doors, leaving more than 56,000 consumers to purchase new insurance plans.

On Friday, the Arizona Department of Insurance announced that Meritus Health Partners is winding down its operations and will no longer offer coverage in 2016. Meritus Health Partners is the 11th of 23 co-ops, or consumer-operated and oriented plans, created under Obamacare to shut its doors. The co-ops have received a combined $2.4 billion from the federal government.

Consumers currently insured by Meritus will remain covered for the rest of the year.

“[W]ith open enrollment beginning this weekend and many Meritus policyholders subject to re-enrollment, it was vital that the department step in and protect Arizona citizens,” Andy Tobin, the state director of insurance, said in a statement.

Meritus Health Partners received $93.3 million in start-up and solvency loans from the Centers for Medicare and Medicaid Services. Despite the money the co-op received, the nonprofit insurance company struggled to enroll consumers in 2014, an audit from the Department of Health and Human Services Office of the Inspector General found.

According to the report, just 869 Arizonans purchased plans from Meritus Health Partners by the end of 2014. The co-op had projected that it would enroll 23,998 consumers.

Meritus Health Partners was one of 13 co-ops that failed to meet enrollment projections, the government watchdog found.

Last year, the co-op offered some of the cheapest plans on the federal exchange, HealthCare.gov. As a result, Meritus Health Partners enrolled more than 56,000 consumers as of June 30, regulatory filings show.

Still, the inspector general found that the Arizona co-op had lost $7.2 million by Dec. 31, 2014. It wasn’t the only co-op to report losses. Twenty-two of the 23 co-ops, including Meritus Health Partners, were in the red by the end of 2014.

Since the co-op opened in December 2012, it’s lost more than $78 million, according to the Arizona Department of Insurance.

Co-ops were created under Obamacare to create competition in regions where few plans would be offered to consumers. Though the federal government awarded more than $2.4 billion to the 23 co-ops that were eventually established, roughly half have struggled to survive.

As of Friday, 11 co-ops have shut their doors. Those co-ops received more than $1.1 billion from the Centers for Medicare and Medicaid Services. More than 690,000 Americans have enrolled in health insurance plans offered by the co-ops.

Seven of those 11—in Tennessee, Kentucky, Oregon, Colorado, South Carolina, and Utah—pointed to lower than expected payments from Obamacare’s risk corridor program as the reason for shuttering.

The Obama administration told insurance companies last month that they would receive just 12.6 percent of their requested payments from the federal government through the program, which was intended to stabilize in the health insurance market disrupted by the implementation of the Affordable Care Act.

Meritus Health Partners learned that they would likely receive less from the risk corridor program several months ago, according to the Arizona Republic. To make up for the lower payments, the co-op sought to raise its rates next year.