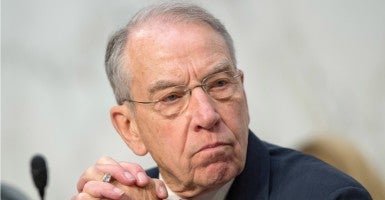 Congressional Republicans continue to press the Department of Homeland Security for answers on how that agency handles the deportation of illegal immigrants suspected of violent crime.

On Friday, the chairmen of both the Senate and House Judiciary Committees sent a letter to Homeland Security Secretary Jeh Johnson concerning a twice-deported man who allegedly kidnapped, trafficked, and repeatedly raped a woman in Missouri.

In the letter, Sen. Chuck Grassley, R-Iowa., and Rep. Bob Goodlatte, R-Va., requested all records of Homeland Security action involving the man, Jose Amaya-Vasquez, who is originally from Honduras.

The Republican chairmen express concern over the recurring release of illegal immigrants from federal custody.

“We have seen numerous examples of illegal immigrants who were in federal custody, but were handed over to state or local law enforcement agencies with sanctuary policies, and subsequently released against into the public,” they write.

The letter outlines numerous questions concerning the case “to identify and prevent this type of enabling of criminal aliens to reoffend.”

This is not the first time Grassley and Goodlatte have prodded Homeland Security to explain Obama administration policies governing the handling of illegal immigrants. The two penned letters earlier in August and October.

A House Judiciary aide tells the Daily Signal that the committee has not heard back about these inquiries and has had to “consistently press” Homeland Security for information.

According to an FBI federal criminal complaint, Amaya-Vasquez had been charged with domestic violence against his girlfriend, handed over to Immigration and Customs Enforcement by local police, and subsequently deported out of the country in June 2014.

In September 2014, the U.S. Border Patrol and Immigration and Customs Enforcement again arrested and deported Amaya-Vasquez as he tried to cross into Texas, according to the FBI.

Lawmakers want to find out what happened in the interim between the second deportation and May 23 of this year, when Amaya-Vasquez allegedly kidnapped his ex-girlfriend and their two-year-old daughter and raped the mother repeatedly while driving them from Kansas City, Mo., to New Jersey.

Amaya-Vasquez is currently charged with kidnapping and illegal reentry after removal, and is in custody in Camden, N.J.