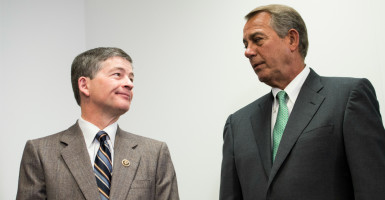 Nearly four months after Congress shut the door on the Export-Import Bank and allowed its charter to expire, 127 Republicans and 186 Democrats voted to bring the controversial agency back to life.

The majority of Republicans, along with House Democrats, passed a bill reauthorizing Ex-Im through 2019, 313-118. One Democrat, Rep. Alan Grayson of Florida, and 117 Republicans opposed the bill.

>>> See how your member voted here.

“The more Americans learn about the Export-Import Bank’s political lending, corruption and fundamental unfairness, the more they want it to end. That’s why we’re seeing a record number in Congress vote to end Ex-Im both in the Senate, where a majority of Republicans voted against it in July, and today in the House,” House Financial Services Committee Chairman Jeb Hensarling said in a statement after the vote.

“The last time the House voted on a long-term reauthorization of Ex-Im, only 93 members voted against it. Today, 118 voted no,” he continued. “Momentum is moving in favor of those who oppose Ex-Im’s corporate welfare and instead support a competitive, free enterprise economy.”

The bill was sponsored by Rep. Stephen Fincher, R-Tenn., and faces an uncertain future in the Senate. There, Majority Leader Mitch McConnell of Kentucky has said that he will not bring a standalone bill reauthorizing Ex-Im to the Senate floor. However, McConnell did say he would accept the legislation if it were attached to another piece of legislation, such as the Highway Trust Fund.

Prior to the bill’s passage, Republicans opposing the bank and Democrats supporting it debated Ex-Im’s merits for an hour on the House floor.

“This is going to be an important debate that we have today because it’s a debate about what type of economy are we going to have,” Hensarling said earlier on the House floor. “An economy based upon fairness, where your prosperity is dependent upon how hard you work on Main Street? Or is it dependent upon who you know in Washington?

Hensarling, whose committee has jurisdiction over Ex-Im, has been leading the charge against the bank for the last several months.

Though he’s had the support of conservatives in the House, members of GOP leadership, and top committee chairmen who believe that the bank furthers corporate cronyism and corporate welfare, Hensarling splits with moderate Republicans and Democrats who believe that Ex-Im helps small businesses and creates jobs.

“Supporters of the bank care about [small businesses], about their jobs, and about their communities,” Rep. Maxine Waters, ranking member of the Financial Services Committee, said today. “It’s high time we re-open the Ex-Im Bank for business.”

Fincher took an unusual—and rarely successful—approach to getting his bill to the House floor.

The Tennessee Republican filed a discharge petition earlier this month to force a vote on the legislation reauthorizing Ex-Im. In doing so, and after receiving the 218 signatures needed for the petition to be considered, Fincher set into motion a three-step process to bypass the Financial Services Committee and leadership.

Forty-two Republicans and more than 100 Democrats signed on to the petition.

The House then cast a procedural vote this afternoon, and the lower chamber succeeded in passing Ex-Im’s reauthorization this evening.

During debate on Fincher’s bill, two top Republicans made their way to the House floor to protest Ex-Im’s reauthorization.

Rep. Paul Ryan, current chairman of the Ways and Means Committee and the likely new speaker of the House, said he strongly disapproved of the bill.

“This is a pretty profound debate we are having,” Ryan, R-Wis., said. “It’s about what kind of economy we’re going to have. Are we going to reward good work or good connections? I think there are plenty of other ways to expand opportunity in this country, and corporate welfare is not one of them.”

“The real question in the debate we’re having comes down to this: do we let government pick and choose who it gives special taxpayer-loans to or not?” McCarthy said. “I believe our constituents know very well what the right choice is. They don’t want their tax dollars backing up any loans for businesses. That’s not the government’s job. The private sector can and should do that. And our economy does best when the government is left out.”

Discharge petitions are typically viewed as an act of rebellion and are rarely spearheaded by the majority party.

Hensarling had previously opted not to move Fincher’s bill reauthorizing the bank through his committee because it was opposed by a majority of the majority party, and Hensarling’s unwillingness to do so sparked Fincher’s actions.

In today’s vote, a majority of Republicans on the Financial Services Committee opposed the bill.

Though it’s not known how a vote on Ex-Im’s future in the Senate would play out, 65 senators supported reauthorization in a test vote this summer.