America’s Next President Must Reverse the Decline in US Power 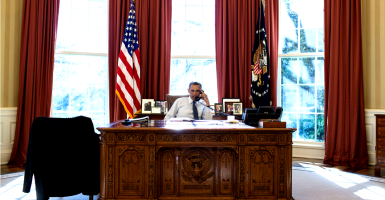 "Whoever succeeds President Obama in the White House must be able to demonstrate the strength and confidence" (Photo: Pete Souza/ZUMA Press/Newscom)

When America’s 45th president enters the Oval Office in January 2017 he or she will inherit a superpower in decline, weakened militarily, floundering internationally, and facing an array of adversaries on the world stage keen to undercut America’s position.

The harsh reality is that after nearly seven years of the Obama presidency, America’s allies are losing faith in Washington, while our enemies are gaining strength and becoming increasingly emboldened.

From the Middle East and North Africa to Eastern Europe and the Pacific Rim, the United States is being aggressively challenged while its commander-in-chief has sought to retreat from the world stage. The dangerous long-term consequences of this feckless approach will be inherited by future generations – unless there is a dramatic reversal in strategic thinking in the White House.

The next leader of the free world faces a stark choice – between continuing the Obama administration’s disastrous approach of “leading from behind” or boldly reasserting American leadership. For the sake of the United States and her allies, it has to be the latter.

America’s next presidency will require a robust “gap strategy” that enables America to rebuild its military might, strengthen its key alliances, and restore its economic prowess while reducing the national debt, by the end of its first four years.

As the Heritage Foundation argues in a new paper: “The Challenge for the Next President: Reversing the Decline in U.S. Power,” whoever succeeds President Obama in the White House must be able to demonstrate the strength and confidence to protect the nation’s vital interests at home and abroad.

These vital interests are “the defense of the homeland, prevention or successful conclusion of a major war with the potential to destabilize regions of critical interest to the U.S., and preservation of freedom of movement within the global commons: the sea, the air, cyberspace, and outer space domains through which the world conducts business.”

There are three core components to this strategy: empowering enduring alliances, rebuilding defense, and making America the engine of economic freedom. The three components should work in concert to project a powerful United States on the world stage, backed up by the military might, international partnerships and economic strength to ensure it can confront and withstand the threats it faces in every corner of the globe.

America’s alliances have suffered in recent years, with key allies treated with indifference and even contempt by Washington.

Our closest ally in the Middle East, Israel, has been regarded with scorn by the current U.S. administration, and, together with U.S. allies in the Gulf, effectively thrown to the wolves via the Iran nuclear agreement, a de facto surrender to the demands of Tehran.

In Europe, the Anglo-American alliance has been significantly weakened at a political level, while America’s allies in eastern and central Europe have felt abandoned in the face of a resurgent and hostile Russia.

The next president must make the restoration of key U.S. alliances a top priority, including the rebuilding of the partnership with Israel, the restoration of the centrality of the U.S.-UK Special Relationship, and the strengthening of the NATO alliance and America’s military commitment to Europe. In Asia, the United States must be more assertive in countering growing Chinese expansionism, while bolstering the sinews of its partnerships with key allies in the region, including Japan, South Korea and Taiwan.

As former British Prime Minister Margaret Thatcher once remarked, “the United States needs friends in the lonely task of world leadership.” Together with its allies, America must be prepared to stand up to the enemies of the free world, including the Islamist regime in Iran, Vladimir Putin’s Russia, and North Korea, as well as an array of Islamist terrorist groups, operating across the Middle East, South Asia and North and East Africa.

This will involve decisively halting Tehran’s ambition to become a nuclear weapons power, reining in Pyongyang, defeating the Islamic State in Iraq and Syria, preventing further Russian aggression in Europe, and winning the long war against al-Qaeda.

A Strong Defense is Needed

The rebuilding of America’s alliances must be coupled with the full restoration of America’s defenses, significantly weakened in recent years through a series of damaging defense cuts. As the Heritage report argues, “diplomacy and economic power, even if skillfully deployed, are often most effective when supported by military force. They are not a substitute for military power and in some instances are wholly ineffective or irrelevant without military power.”

The next president must reprioritize defense spending, while maintaining the aggregate spending levels for discretionary programs under the Budget Control Act levels. Increased investment in America’s defenses should be aimed at restoring cuts to capacity (particularly ground forces), accelerating readiness for all the services, shifting initiatives from the Overseas Contingency Account to the baseline defense budget, increasing funding for updating nuclear weapons and missile defense systems, and providing stability for modernization programs. This should be combined with reforms aimed at making the Pentagon and the Department of Defense more efficient managers of U.S. defense.

The revitalization of America’s bilateral and multilateral alliances, and the fortifying of America’s military will be enhanced by adopting a policy of making America the engine of global economic freedom.

A stronger and more self-confident U.S. economy based on free market principles, in tandem with an economic freedom agenda abroad, should be at the heart of the next president’s vision for restoring American leadership.

The adoption of a free market energy export agenda, the repeal of protectionist measures such as the Jones Act, and pursuing genuine free trade agreements with sovereign nation states, can only foster America’s prosperity while promoting its economic interests abroad.

America’s next president must think big, and present a clear-sighted strategic vision for protecting and advancing U.S. interests on the world stage. The consequences of “leading from behind” will be devastating unless they are reversed. America’s 45th president must be prepared to decisively implement robust principles and policies that keep America and its allies safe, while weakening the enemies of the free world.