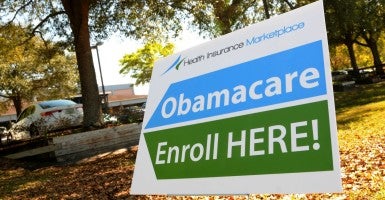 This is not particularly surprising. Obamacare has certainly led to more being enrolled within Medicaid—which has been costly for taxpayers.

Unfortunately, some reporters misread the study and have concluded that it was in fact less costly for states to expand Medicaid through Obamacare.

What tripped up these reporters were figures in the study that related to state government’s share of total spending. Kaiser found that state spending on Medicaid increased 3.4 percent in expansion states, but 6.9 percent in non-expansion states.

States Will Begin to Pay More

However, state spending on Medicaid appeared to decrease because the federal government is temporarily picking up the tab in expansion states. These states will soon start having to pick up more of the cost of Obamacare, as federal funding is scheduled to decline from 100 percent to 90 percent in the coming years.

The impact of that 10 percent federal funding reduction on expansion states’ budgets will be magnified because it will apply to a large share of those states’ (now much bigger) Medicaid populations.

Medicaid spending will likely continue increasing in all states due to rising health care costs and population growth—and all will have to cover their shares of that increase.

Expansion states will also face the added burden of needing to replace declining federal support with more state tax dollars. The study, using total growth rate, found that all states had higher Medicaid enrollment and spending and the increase was much greater in the Obamacare expansion states.

Thus, the relative growth rates (what a state is paying for this year) that the reporters focused on will likely reverse in the coming years—with state Medicaid spending growing faster in the expansion states than in the non-expansion states.

Indeed, as Kaiser noted in the full report on its survey of state Medicaid officials, expansion states are already looking for ways to fund those anticipated state spending increases.

Yet, if Medicaid expansion didn’t cost states, or increase a state’s general revenue spending on the program—as it has so often been sold at the state level—then why would a state have to figure out ways to pay for it in the future?

Expanding Medicaid Is Not the Answer

Medicaid expansion is appealing in the early years, but over time costs continue to rise for states.

Expanding Medicaid is not a way for states to somehow spend less on the program. The only exceptions to that rule are those states—most notably, New York, Massachusetts and Arizona—that, prior to Affordable Care Act, were already covering (through Medicaid waivers) large numbers able-bodied adults who now qualify for the expansion.

By adopting the expansion, those states were able to substitute federal spending for state spending for a portion of their existing Medicaid populations. But those state “savings” were simply bailouts at the expense of federal taxpayers.

Who pays for what portion, and when, is secondary to the much larger, and inescapable, fact that the Medicaid expansion comes at a substantial cost.