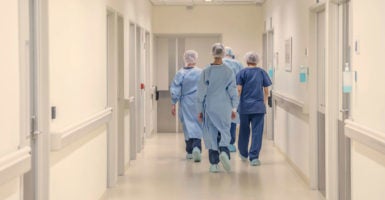 Many Obamacare supporters claim the law has expanded health coverage to upwards of 20 million Americans, but new data shows that isn’t accurate.

As part of Congress’ continued push to repeal Obamacare, the House Budget Committee held a hearing this week titled “The Failures of Obamacare: Harmful Effects and Broken Promises.”

Heritage Foundation expert Ed Haislmaier was one of four expert witnesses who testified.

Haislmaier presented new data regarding gains in health coverage since the full implementation of Obamacare began in 2014.

Most of the reports on coverage gains, such as the Obama administration’s, are typically based on government or private survey data rather than actually counting the change in private insurance or Medicaid program enrollments.

Haislmaier’s testimony highlighted his previous findings that only about 14 million people had gained coverage during the first two years of Obamacare’s full implementation (2014-2015). In addition, he reported preliminary findings for 2016.

Data is not yet available for the full year, but based on the first three quarters of 2016, Haislmaier finds a net total increase in coverage of about another 2.5 million people.

In sum, Medicaid coverage accounts for 81 percent of the total gain in coverage for the first three quarters of 2016. This is consistent with Haislmaier’s previous findings that the bulk of the coverage gains since Obamacare’s full implementation have been in the Medicaid program, not private insurance.

Adding the 2016 preliminary data to the coverage gains from 2014 and 2015, there has been a total net gain in coverage of 16.5 million individuals from Obamacare’s launch through the first three quarters of 2016.

Once again, the data confirm that Obamacare’s principle coverage effect has been to expand Medicaid.