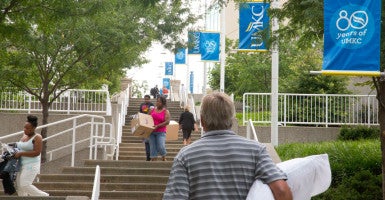 The University of Missouri-Kansas City is one of the colleges the ACLU has filed a lawsuit against for not allowing students in the Deferred Action for Childhood Arrivals program pay in-state tuition. (Photo: UMKC/Flickr/CC BY-NC 2.0/https://flic.kr/p/fvAZBP)

The American Civil Liberties Union filed multiple lawsuits in Missouri last week on behalf of three college students who claim they were wrongfully barred from receiving in-state tuition because of their immigration status under President Barack Obama’s executive action.

The ACLU’s Missouri division sued three colleges in the state for “illegally” charging those students an international rate, arguing the state law requiring the tuition hike is invalid.

The students driving the lawsuits are part of the federal Deferred Action for Childhood Arrivals program, which protects undocumented immigrants who arrived in the U.S. under the age of 16 from deportation, but does not grant legal status.

The tuition increases hit those enrolled in DACA last summer after state legislators inserted language into the preamble of a budget bill requiring that colleges accepting state funds charge “any student with an unlawful immigration status” in the U.S. the same rate “charged to international students.”

Jeffrey Mittman, the executive director of ACLU’s Missouri chapter, said the tuition raise violated state law because the language was placed in the preamble of the bill rather than passed as independent legislation.

“Unfortunately, even though clear legal analysis shows that it’s not binding, it’s not legal, it’s not a requirement—these universities then raise tuition rates,” Mittman said.

The students affected, he continued, are “lawfully present” in the U.S. and have lived, worked and “in many cases” paid taxes in the U.S. their entire lives. He said Missouri law permits students who have lived in the state and are lawfully in the U.S. to qualify for in-state tuition.

“Young people who strive to educate themselves, who work hard to get ahead, then have better jobs and contribute more to the economy,” he said. “All of those reasons combined show why it is just bad public policy, it’s wrong and it’s illegal to charge these young Missouri students inflated tuition rates.”

Cully Stimson, senior legal fellow and manager of The Heritage Foundation’s national security law program, said a federal statute signed under President Bill Clinton “prohibits public colleges from offering in-state tuition rates to undocumented immigrants based on their residence within the state unless that same rate is offered to all students across the U.S.”

Since Missouri has not passed a law giving in-state tuition to undocumented immigrants, Stimson continued, the ACLU lawsuit “has no merit, despite President Obama’s executive action called DACA.”

“The fact is that they’re trying to exploit what they believe is a technical loophole in draftsmanship to force a court to enforce a misreading of the law because they can’t get the legislature to do what they want on a policy basis,” he said.

Stimson called the suit a “political maneuver” to further the group’s policy preferences.

“Setting aside the fact that it’s a violation of the law and the rule of law, it’s not fair to any student in any other state besides Missouri to have to pay out-of-state tuitions when illegal immigrants living in Missouri get in-state tuition,” he said.

Mittman claimed that while the principle marks an important public policy discussion, the ACLU’s lawsuits are focused explicitly on a specific question of Missouri law.

“Does this improper preamble language, which is not binding, is not legal and again, is bad policy, does that allow the tuition raise? It doesn’t.” he said.