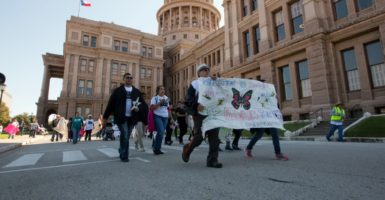 Texas Gov. Greg Abbott says he expects the Legislature to pass an anti-sanctuary city bill this year, opening a new front in the battle over “local control.”

Weighing in on the intensifying national immigration debate, the Republican governor pledged to sign S.B. 4, which would require municipalities to enforce migrant detainers at local jails and withhold state grants if they don’t comply.

“I will work with the Legislature to compel government bodies and employees to live up to their oath of office,” Abbott declared.

Cities, counties, or universities that violate the law will face a “multitude of consequence, ranging from financial penalties to removal from office,” the former state attorney general said.

“It’s erroneous to have an attitude that laws are like some big buffet where you can choose one item and ignore other items,” Abbott said, referring to sanctuary cities and campuses.

Responding to reports of crimes committed by illegal immigrants—some of them after multiple deportation—Hernandez told The Texas Tribune: “I just don’t think you solve the criminal justice process by deporting them. We talk about being progressive. I believe we need to lead the way.”

“If we enforced [immigration] laws, we would reduce our medical welfare and education costs,” Korkmas told Watchdog.org.

In introducing S.B. 4, state Sen. Charles Perry, R-Lubbock, cited the election of Donald Trump, saying, “The American people made it clear that solving our illegal immigration crisis must be a priority. We cannot sit idly by and allow local policies to undercut efforts made at the federal and state level.”

Bob Dane, executive director of the nonpartisan Federation for American Immigration Reform, said, “Local politicians who support sanctuary policies are, in effect, giving the middle finger to federal law enforcement and, in so doing, giving it to every law-abiding, taxpaying resident.”

“Those days are over,” Dane told Watchdog from his Washington, D.C., office. “Since there is no longer fear of recrimination by [President] Barack Obama’s iron-fisted Department of Justice, Texas should pass [S.B. 4] and Abbott should sign it. The rule of law will be restored and Texas will be a safer place.”

“I think Abbott is smart enough to know how [antithetical] sanctuary cities are to voters. It fits with his belief that cities have abused their home-rule ‘local control’ and are violating freedoms the state is pledged to uphold,” said Judson, a former councilman in the San Antonio suburb of Olmos Park.