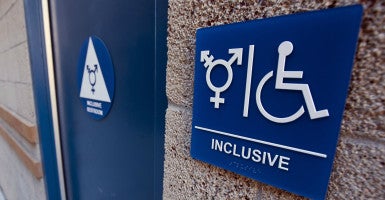 Houston residents will vote on an ordinance that would allow people of any gender in bathrooms on Nov. 3. (Photo: David Bro/ZUMA Press/Newscom)

Former Astros baseball player Lance Berkman and the mayor of Houston are in a tussle over an ordinance that would allow people of any gender in bathrooms, as part of a non-discriminatory policy.

In an advertisement for Campaign for Houston (a group that stands for “no men in women’s bathrooms”), Berkman encourages Houstonians to vote “no” when the Houston Equal Rights Ordinance, Proposition 1, goes to vote in the next city elections.

“I played professional baseball for 15 years, but my family is more important.,” Berkman says in the ad. “My wife and I have four daughters. Proposition 1 would allow troubled men who claim to be women to enter women’s bathrooms, showers, and locker rooms. It’s better to prevent this danger by closing women’s restrooms to men rather than waiting for a crime to happen. Join me to stop the violation of privacy and discrimination against women.”

Berkman feels that the policy discriminates against people, like himself, who believe that people of the opposite sex should not have to share the same bathroom, TheBlaze reports.

“As I understand it, there is an ordinance in Houston that would allow pretty much open bathrooms,” Berkman told the St. Louis Post Dispatch. “I certainly would never want to discriminate against anybody or make anybody feel uncomfortable.”

“It’s not like we’re preventing somebody from voting or depriving of a basic right that we in America consider your basic freedoms,” Berkman continued. “We’re talking about just, hey, if you’re a guy go to the bathroom in the guy’s bathroom and if you’re a girl go to the girl’s bathroom.”

Houston Mayor Annise Parker chose Twitter as a means to state her feelings towards Berkman’s comments.

Lance Berkman played in St. Louis. Guess his girls didn’t go to his games! SL has a non-discrimination ordinance.-A http://t.co/gzEbKIYOd9

“The issue of the most recent ad,” Parker stated Wednesday at a weekly press conference, “[is that t]he gentleman in question has actually lived and/or played ball in two cities that have the same policy. It didn’t seem to bother him then.”

When Lance Berkman went from NYC to STL to play ball did he do it to escape NYCs scary nondiscrimination law?-A

“She is using her high office to intimidate people that would stand against an ordinance that she supports,” Campaign for Houston spokesperson Jared Woodfill, who helped recruit Berkman for the ad, told KHOU-TV.

Parker tweeted about Lance Berkman in total three times, calling him a “hypocrite.”

Then Lance Berkman went to Dallas. Oops. Dallas amended its Charter to clarify gender identity protections. Can you spell hypocrite?-A

“Any time you have an issue of inclusion and fairness and tolerance that is put on the ballot and voted down, it sends a bad signal,” Parker stated at the press conference. “I’m worried about the image of Houston around the world as a tolerant, welcoming place if this goes down.”

In an answer to questions from reporters, Parker said that other cities have similar equal rights ordinances as the one proposed for Houston.

“I’m passionate about this issue,” she said. “But I’m also frustrated because 200 other American cities, 17 states have some version of this that includes sexual orientation and/or gender identity.”

“We didn’t break any new ground,” Parker stated. “There’s nothing here that hasn’t passed in other cities, and it may have been contentious in those other cities but the fact that there’s so much misinformation, and not just misinformation, just out-and-out ludicrous lies is very frustrating.”

Houston residents will vote Nov. 3 on the ordinance.