Is a Short-Term Speaker the Answer? House Republicans Consider Possibility 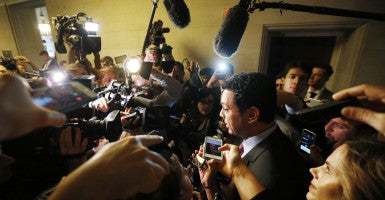 House Republicans are scrambling after Majority Leader Kevin McCarthy’s shock announcement that he was withdrawing from the speaker’s race.

Some have floated the idea of finding a candidate who could fill the leadership seat in a temporary caretaker role.

Although the race has narrowed without the frontrunner, neither Rep. Jason Chaffetz, R-Utah, nor Rep. Daniel Webster, R-Fla., seems close to clinching the 218 votes necessary to win the seat.

As a stopgap, some members said they’re interested in recruiting a representative who could serve as an interim speaker before leaving office in 2016.

Rep. Dana Rohrabacher, R-Calif., called for a strategic appointment so that “the rest of us can focus on winning the election and making sure Americans are mobilized for the cause.”

“The best course would be for us to select a candidate for speaker who will serve in that capacity for the next 15 months,” Rep. Tom Price, R-Ga., said in a statement.

Price, who had been running for majority leader before McCarthy withdrew his bid for speaker, explained that a caretaker “would allow the House to complete the business in a responsible manner, providing ample time for everyone’s voices to be heard, leading into full leadership elections in November of 2016.”

“I’d call it a shepherd for the moment, a short-term caretaker,” he explained—someone “who can continue to make our decisions, unify the conference, and doesn’t have ambitions for anything else.”

Reps. Candice Miller of Michigan and John Kline of Minnesota could fit that description, according to Politico. Both have already announced they will not seek re-election, and both have been mentioned as alternatives by their House colleagues.

Shortly after McCarthy’s announcement, Miller said in a statement that she respects “Kevin’s decision and believes that, in the upcoming weeks, [the GOP] conference will elect a speaker with strong conservative values who can advance the people’s agenda.”

A spokesperson from Kline’s office said the congressman “is confident House Republicans will select someone who can do what’s best for our country and this institution.”

Neither Kline or Miller has ruled out a run.

Others strongly oppose the idea of a provisional speaker altogether. Rep. Blake Farenthold, R-Texas,  told The Daily Signal he thinks electing  “a short-term caretaker would be a horrible decision.”

“The American people want Congress to get the country on the right track, not kick the can down the road. We need to elect a conservative leader now,” he said.

With McCarthy out, Speaker John Boehner, R-Ohio, called on Rep. Paul Ryan, R-Wis., to enter the race. According to The Washington Post, Boehner has called the representative twice over the phone, urging him to make a run.

In response, Ryan, the chairman of the House Ways and Means Committee, echoed his earlier refusals.

“While I am grateful for the encouragement I’ve received,” Ryan said in a statement, “I will not be a candidate.” The former vice presidential candidate cited his chairman responsibilities as reason for not running.

To fill the vacuum, Newt Gingrich has even been floated as a  candidate. Talk radio personality Sean Hannity asked Gingrich about the possibility of a comeback speaker bid. Gingrich chuckled away the question at first.

Addressing House Republicans, the former speaker of the House said, according to The Washington Examiner, “You show up with 218 votes, I’ll talk.”