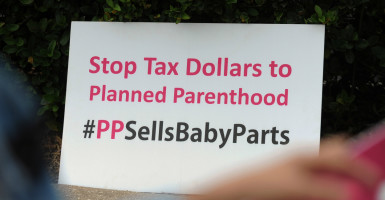 On Thursday, Sue Thayer, a former facility director for Planned Parenthood of the Heartland, will testify against her former employer in front of the House Judiciary Committee. She says the organization "is more concerned about its bottom line than it is about the health and safety of women." (Photo: Paul Hennessy/Polaris/Newscom)

Sue Thayer, a former facility director for Planned Parenthood of the Heartland, will testify against her former employer before the House Judiciary Committee on Thursday.

In prepared remarks, Thayer alleges that the nation’s largest abortion provider “is more concerned about its bottom line than it is about the health and safety of women.”

“No business, certainly no healthcare clinic, should view a woman’s body as a profit center, yet that is exactly what Planned Parenthood does,” Thayer wrote.

Thayer said that she began working for Planned Parenthood because she wanted to serve her community.

“As an adoptive parent of three children and a foster mother of 130, I did not fit well into Planned Parenthood’s corporate culture. But I believed the message that by working at Planned Parenthood I could help reduce abortion and serve women. I was wrong.”

When Thayer started at the clinic, it didn’t perform abortions. It later implemented webcam abortions. At her clinic, she wrote that after non-medical staff performed an ultrasound to determine fetal age, an off-site doctor would approve two abortifacient pills to be given to the patient—one to take in the clinic and one to take at home.

Thayer also said the clinic would coerce Medicaid patients to pay for a portion of their treatment, count it as a “voluntary donation,” and then bill the full amount to Medicaid.

“There is a reason that, despite technically being a nonprofit, Planned Parenthood has reported $765 million in excess revenue over the last 10 years. It is run very much like a business—focused on increasing revenues, placing its own bottom line above the interests of women.”

Thayer is represented by Alliance Defending Freedom in a lawsuit against Planned Parenthood of the Heartland.

“American taxpayers should not be forced to fund a billion-dollar corporation that was caught on camera negotiating the sale of baby body parts,” Casey Mattox, a senior counsel at Alliance Defending Freedom, said in a statement. “No one should miss the horrific reality of what Planned Parenthood does behind closed doors, as most graphically revealed in the undercover videos. Our tax dollars should fund the thousands of trusted, local public health clinics across America, not provide corporate welfare for Planned Parenthood and its barbaric practices of trafficking baby parts, failing to report statutory rape, and fraudulent billing.”

Allegations that Planned Parenthood is trafficking aborted fetal body parts are under investigation by several congressional committees after the Center for Medical Progress released a series of undercover videos of conversations actors portraying buyers from a human biologics company had with the organization’s executives.

The House Judiciary Committee hearing will take place Thursday at 2:00 p.m. You can watch a live stream here.