Media Research Center: Nancy Pelosi Owes Reporter ‘an Unqualified Apology’ and an Answer to His Question on Human Life 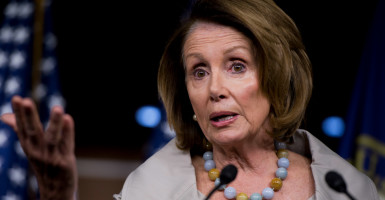 In a letter that was hand-delivered to House Minority Leader Nancy Pelosi's office, the Media Research Center called for her to apologize to a reporter for refusing to answer a question about when human life begins. (Photo: Tom Williams/CQ Roll Call/Newscom)

The Media Research Center has called for House Minority Leader Nancy Pelosi, D-Calif., to apologize for her refusal to respond to a reporter’s question about when human life begins, and for her to answer it.

In a letter hand-delivered to Pelosi’s office, Brent Bozell, the founder and president of the Media Research Center, wrote that the reporter was “credentialed by the United States Congress” and had asked Pelosi “a simple, straightforward question” about her “definition of human life.”

“It is a reporter’s job to ask tough questions,” Bozell wrote. “Your answer was disrespectful, unprofessional, and condescending.”

Bozell added that reporters affiliated with the Media Research Center have asked the “exact” questions of other members of Congress.

“You owe the reporter, Mr. Dorman, an unqualified apology,” Bozell wrote. “You should also answer his question.”

The Daily Signal previously reported that Pelosi refused to answer the reporter’s question about when human life begins during a recent press conference.

Sam Dorman, a reporter with CNSNews.com, a website affiliated with the Media Research Center, asked Pelosi, “In reference to funding for Planned Parenthood, is an unborn baby with a human heart and a human liver a human being?”

Pelosi told Dorman that she did not “intend to respond” to his “ideological questions,” which “have no basis in what public policy is that we do here.”

Planned Parenthood faces allegations raised by a series of undercover videos released by the Center for Medical Progress that affiliates of the organization are selling aborted fetal body parts to researchers for profit.

Spokespersons for Planned Parenthood, the nation’s largest abortion provider, have denied participation in illegal transactions and claimed that they are merely reimbursed for the costs associated with a donation to researchers.

During a recent interview with CNN, Pelosi called for the Center for Medical Progress to be investigated.

Cecile Richards, the CEO of Planned Parenthood, once worked as Pelosi’s deputy chief of staff.