Nancy Pelosi: When Human Life Begins Has ‘No Basis’ in Public Policy 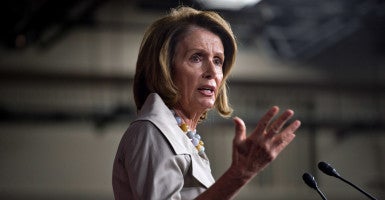 House Minority Leader Nancy Pelosi, D-Calif., refused to answer a reporter’s question about when human life begins during a press conference on Thursday.

A reporter with CNSNews.com, a website affiliated with the Media Research Center, asked Pelosi, “In reference to funding for Planned Parenthood, is an unborn baby with a human heart and a human liver a human being?”

“Why don’t you take your ideological questions—I don’t, I don’t have—” Pelosi began.

“If it’s not a human being, what species is it?” the reporter pressed.

“No, listen, I want to say something to you,” Pelosi said. “I don’t know who you are, and you’re welcome to be here, freedom of this press. I am a devout practicing Catholic, a mother of five children. When my baby was born, my fifth child, my oldest child was six years old. I think I know more about this subject than you, with all due respect.”

“So it’s not a human being, then?” the reporter asked.

“I do not intend to respond to your questions, which have no basis in what public policy is that we do here,” Pelosi said.

Watch the encounter below courtesy of the Media Research Center:

Planned Parenthood is under investigation by several states and congressional committees due to allegations raised by undercover videos released by the Center for Medical Progress that affiliates of the nation’s largest abortion provider are selling aborted fetal body parts to researchers for profit.

Trafficking fetal body parts is a felony in the United States. Spokespersons for Planned Parenthood have denied participation in illegal transactions and claimed that they are merely reimbursed for the costs associated with a donation.

During a recent interview with CNN, Pelosi said the Center for Medical Progress “should be investigated.”