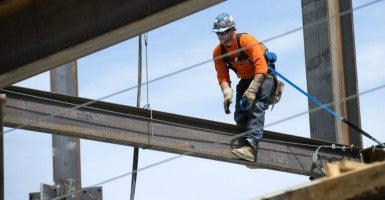 A construction workers prepares to install a steel beam in a section of the new Sacramento Kings arena, in Sacramento Calif. (Photo: Hector Amezcua/ZUMA Press/Newscom)

The payroll survey also found average hourly wages dropping by 1 cent and average weekly hours falling by 0.1 hours a week. Both changes are consistent with—but do not necessarily demonstrate—reduced employer demand for labor.

However, the labor force participation rate dropped another 0.2 percentage points to 62.4 percent—its lowest level since 1977.

It is too early to forecast another recession. But the employment report is another data point suggesting that the labor market is not doing as well as previously believed.