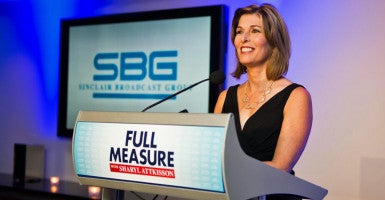 Sharyl Attkisson, host of "Full Measure," speaks at a reception Wednesday at the Newseum in Washington, D.C. (Photo courtesy of Sinclair Broadcast Group)

When former CBS News investigative journalist Sharyl Attkisson arrived at Washington’s Newseum on Wednesday night for a party celebrating the launch of her new Sunday show “Full Measure,” the only thing she seemed nervous about was whether or not she needed a ticket for admittance.

Stopping in front of the event’s check-in host before riding the glossy elevator up to the eighth floor, she asked, “Do I need a ticket or something?”

“You are the ticket!” replied an obviously tickled events manager.

Later, when she stepped to the podium after being introduced by Sinclair Broadcast Group’s Vice President of News Scott Livingston—who called the broadcast “dedicated to the fearless reporting”—a clear vision, free of doubt, shone through.

That resoluteness appears characteristic of Attkisson, a senior independent contributor to The Daily Signal and a steady journalist who claims impartiality. Attkisson is not known for shying away from either her personal convictions or the direction in which her work commitments take her, controversial as they may be.

So it’s perhaps fitting that when her half-hour show, dedicated to covering topics she says other news outlets won’t, debuts this weekend on 170 ABC, NBC, Fox, and The CW affiliates in 38 percent of the country, Donald Trump will make an appearance.

>>> Find out when and where you can watch “Full Measure”

The debut episode will look at the effect an influx of legal immigrants can have on a community—in this case, a small town in Maine. “These legal refugees, legal asylum seekers, are a deserving, well-meaning, great people who often become great citizens,” Attkisson said of the episode at the launch party.

“But the dilemma is that they come to these towns that really can’t afford the influx at times, and they have to grapple with scarce resources,” she continued. “This is something that more American towns are going to be dealing with.”

Throughout her career, Attkisson has been critical of both Republicans and Democrats.

“Most of my reporting has nothing to do with politics,” Attkisson says. “But I guess that’s what has gotten the most attention in the last couple years, is reporting that does. But most of it, I see, is looking at taxpayer issues, whoever is in charge, Republicans or Democrats.”

Attkisson’s agenda, she says, lies in the best interests of her viewers.

The name for her show, “Full Measure,” comes from President Abraham Lincoln’s Gettysburg Address, and refers to soldiers who gave their all—their “full measure.” It’s how she approaches reporting, she says.

And while that approach has created critics, she also has a loyal base of fans.

“I was fortunate to meet Sharyl through my role as chairman of the Congressional Media Fairness Caucus, which encourages the media to report the news fully, accurately, and fairly,” says Rep. Lamar Smith, R-Texas. “At a time when many Americans have lost confidence in the news they receive, Sharyl exemplifies accuracy and fairness.”

This dedication to “accountability reporting,” as Attkisson calls it, has led to heated debates and, ultimately, her resignation from CBS News. In her 2014 book, “Stonewalled,” Attkisson alleges that editorial interference from upper-level management at CBS News prevented her from pursuing leads and reporting in a manner she perceived to be fair on topics like the 2012 terrorist attacks on a U.S. compound in Benghazi. Attkisson claims that the federal government hacked her computer with spyware; after admitting to being “outraged” on air, Attkisson filed a lawsuit that is ongoing.

After Attkisson resigned from CBS News, she says, she got “a lot of offers to continue to do journalism in various facets” but feared jumping into a long-term commitment too quickly.

In that interim period, she contributed to The Daily Signal, among other outlets.

It wasn’t until Sinclair approached her roughly a year after her CBS News resignation that she really felt she was being presented with a unique opportunity to do what she says she does best: investigative reporting.

Attkisson says her stories will focus on whistleblowers; government waste, fraud, and abuse; and taxpayer waste, among other things. She plans to tell stories, she says, without “trying to steer [them] in a direction just to prove a point.”

Despite Attkisson’s exit from CBS News, she now finds herself surrounded with colleagues from her time at the network. Two producers at “Full Measure,” Batt Humphreys and Kim Skeen, are former CBS News producers. “Sharyl and I have been friends for 20 years,” says Humphreys. “I’ve known and I’ve worked with a lot of people and talent in this business over 30 years and 20 years at networks and believe me, I’ve worked with plenty of monsters. And she is as far from that as you can imagine.”

“She’s one of the smartest people I know, and that’s the level of engagement I like playing in,” he adds. “She’s a great storyteller.”

A Different Kind of Sunday Show

“Full Measure,” Humphreys says, will differentiate itself from the Sunday morning competition by not playing into the Washington media status quo.

“There are at least five networks that are doing specific, political chats on Sunday mornings and it’s never been my intent, nor would it be, to create another show to offer the same four or six legislators on a panel or the same experts every week to just talk about things ad nauseam,” Humphreys says. “We’re developing a broadcast that is new that has a chance to tell stories in a long-format, magazine style.”

Legal immigration is one of the taxpayer issues that Attkisson and Humphreys plan to tackle in this long-format style. They refer to it as an “untouchable topic.”

Attkisson argues she probably could not have reported on it during the latter half of her 20-year term as a reporter with CBS News’ Washington bureau.

“Many topics in the media today, it’s almost as if the media picks a right and a wrong side, and only shows you one facet,” Attkisson says. “There are plenty of stories about the positive aspects of [legal and illegal immigration]. I also argue we should be covering the costs and some of the problems that come with that as well.”

For all its virtue, the show has, perhaps, an uphill climb against better-known competition. Sinclair, meanwhile, reportedly hopes the program will help to increase its profile in addition to Attkisson’s.

For now, it seems the relationship is mutually beneficial.

“I’ve been promised that [editorial interference] won’t be an issue,” Attkisson says. “I’ve already gone through very rigorous editorial processes for the stories that I’ve worked on so far, and haven’t had any of it.”