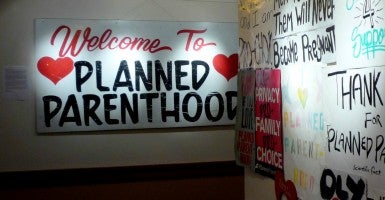 Planned Parenthood has hired a PR firm to try to squash coverage of the undercover videos. (Photo: Jason Taellious via Flickr)

In the case of the unfolding scandal involving the nation’s largest abortion provider, Planned Parenthood, much of the mainstream media have fallen for the old line, “Nothing to see here.”

And now we find out perhaps one reason why is that Planned Parenthood has hired a major crisis PR firm to make sure the news media stay on the sidelines of what is clearly a newsworthy story.

The group circulated a memo to reporters and producers late Monday that discouraged them from airing the undercover videos, arguing that they were obtained under false identification and violated patient privacy.

Those patients’ privacy should not be further violated by having this footage shared by the media,’ the memo reads.

Here’s the problem: as anyone who has watched the third video knows, there are no patients shown in the video.

No, what Planned Parenthood would presumably like to keep private are the scenes of a lab technician dissecting a baby’s body parts in a pie dish. They would prefer you not hear the laughter of a Planned Parenthood medical assistant as she exclaims that the tissue they are looking at gets “five stars.”  (That can be heard and seen at 9:48 in the third video.)

They would prefer you not hear the comments made by a Planned Parenthood doctor in the video, who, when discussing the costs of individual fetal organs and tissue, says, “I think a per item fee works a little better, just so we can see how much we can get out of it.” (That can be viewed at 10:41 in the video.)

>>> Read About ‘The Pro-Life Comeback’ in The Heritage Foundation’s 2015 Index of Culture and Opportunity.

They also don’t want people to see the documents from a biomedical company that some Planned Parenthood affiliates have partnered with that advertises the “financial profits” that can be gained by working with them and that expressly states they “fiscally reward[] clinics.” (You can see these documents at 1:38 in the video and hear them being discussed at 3:09.)

They are hoping you won’t see the Planned Parenthood doctor from an earlier video featured here again, haggling over the price for fetal body parts as she jokes, “I want a Lamborghini.” (That little gem can be found at 5:45 in the video.)

And they certainly don’t want people to see the tiny little arm, the hand and five fingers of a dismembered almost 12-week-old unborn baby in the pie dish. (It is hard to view, but you can do so at 10:22 in the video.)

So, yes, Planned Parenthood is concerned about privacy. Its own.

I thought news organizations wanted to expose cover-ups. Usually, when there is even a hint of scandal, reporters are knocking down the door to get answers. But apparently they are a little less interested in investigative journalism that could bring down one of the sacred cows of the left.

And if the media blackout wasn’t enough, now a California court has issued a temporary restraining order to prevent any more videos featuring employees of the lab seen in this third video from being released to the public.

You know what that means—Planned Parenthood and the lab clinics it has been teaming up with are fearful of further exposure of their supposedly legal activities. And that’s the crux of the matter—if they have nothing to hide, what’s the big deal?

Thankfully, the mainstream media is not what it used to be, and we the people have tools we didn’t use to have. No fat-cat PR firm is going to intimidate me from sharing this story and these videos with friends and neighbors. I hope you’ll do the same.

This commentary was updated to include news about the temporary restraining order on future videos.