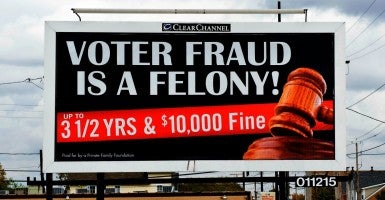 The 2016 election year is almost upon us, and Americans of all stripes are preparing for a drawn out political season. Republicans and Democrats will be going to the polls in droves to select their parties’ nominees—and eventually to select the nation’s most powerful political figure.

With so much on the line, the integrity of the electoral system must be ensured. Voters have to be confident that the results reflect the will of the people, or the whole democratic system is undermined.

Unfortunately, there are those who are happy to undermine it. The Heritage Foundation’s voter fraud database documents nearly 300 examples of thieves and fraudsters convicted of forging absentee ballots, diluting legitimately cast votes, and effectively disenfranchising whole communities—all to serve their own ambition or advance their ideological agendas.

Here are some of the latest cases to grace the list:

1. Adam Kane Easlick pleaded guilty to a felony charge of voting in a place where he was not a resident. During the 2012 presidential election, Kane lived in Ypsilanti, Mich., but illegally voted in Tuscola County after registering at a post office there. In fact, Easlick had registered to vote at multiple addresses outside his home town—even brazenly placing an ad on Craigslist seeking an address in nearby Ingham County so that he could obtain a fraudulent driver’s license there. The serial fraudster now faces a sentence of six months’ probation.

2. In 2013, Wisconsin resident Leonard K. Brown pleaded guilty to 5 felony counts of illegally voting in West Milwaukee, when in fact he did not reside there. Then, in 2014, a jury found him guilty of voting twice in the 2012 presidential election. Brown voted in person on election day, but he had already cast an absentee ballot several days earlier in a different jurisdiction. Brown was given a nine-month jail sentence and ordered to pay a $1,750 DNA testing charge.

3. Eugene Gallagher was the top vote-getter in the 2013 Taylor, Penn., race for borough council. It was later revealed that the newly elected councilman had persuaded nonresidents to register for absentee ballots using a Taylor city address. Gallagher was forced to resign and later pleaded guilty to two misdemeanors, including forgery, stemming from the vote fraud, and a separate charge of driving under the influence. A judge sentenced him to a maximum of ten months in the county jail, two months of house arrest, 200 hours of community service, and five years of court supervision. His guilty plea will bar him from ever holding public office again.

4. In 2011, Jenny Wanasek was going door to door soliciting signatures for a petition to recall Wis. Governor Scott Walker. When Wanasek arrived at Caitlin Haycock’s home, Haycock signed the petition—and then told Wanasek that she also wanted to sign for both of her parents, who were out of the country. Wanasek literally looked the other way as Haycock committed her forgery. Haycock pleaded guilty to a misdemeanor election fraud charge and was fined $500 and ordered to serve 40 hours of community service. Wanasek also pleaded guilty to a misdemeanor charge and received the same sentence.

These stories, and the others in Heritage’s database, are just a sampling of the broader universe of vote fraud. No doubt many instances of fraud—from forged absentee ballots and duplicate votes to coordinated efforts by candidates to buy their way to victory—are never detected, much less investigated and prosecuted.

In a recent report, Does Your Vote Count?, Heritage’s Meese Center laid out not only the scope of the problem, but steps governments can take to secure the ballot box against criminal activity. And contrary to the oft-repeated myth, these policies would not prevent eligible citizens from casting their votes.

With 2016 right around the corner, states must take seriously the task of protecting the sanctity of the ballot. The core of America’s great democratic experiment is an electoral system that is free and fair; it is only through proper vigilance that our elections will remain that way.