Meet the Police Officer Who’s Been Charged With Voter Fraud 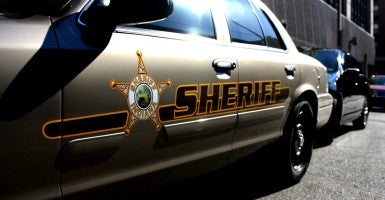 Call the cops! It looks as though someone is committing voter fraud in Indiana again! Ironically, in this case, however, the alleged fraudster who has been arrested by the Indiana State Police was a cop.

Unfortunately, even officers who graduate from the Indiana Law Enforcement Academy are capable of violating the public trust by allegedly trying to steal an election.

That is the case with Officer Lowell Ross Colen of the Rising Sun Police Department, situated in a small Indiana town of around 2,300 people on the Ohio River across from Kentucky.

Colen was apparently an average guy at the police department. According to his chief, Dave Hewitt, Colen was “fairly well liked and very loyal.” Hewitt described Colen as the “kind of guy that would come in and put his time in.” However, it seems Colen was doing more than providing for the public safety while on duty at the Rising Sun Police Department.

Colen wanted individuals to vote for his father, Francis “Swede” Colen, in the 2015 May primary for city council. So he allegedly proceeded to fill out absentee ballot applications for people who were not even eligible to vote in the election, and then voted with these ballots after he received them from election officials.

According to the Indiana State Police Department, he forged the signatures of the supposed voters on some of the documents before turning them into the Ohio County, Ind., clerk’s office.

In some cases, Officer Colen is even believed to have been in uniform and on duty while committing the acts.

In a twist of fate, the voting scofflaw was arrested in his home on charges of official misconduct, forgery, voter fraud, and ghost employment. He has been charged with 13 felony counts and is, of course, entitled to a presumption of innocence, so it remains to be seen what the final disposition will be.

Nonetheless, this goes to show that, contrary to what some skeptics say, voting fraud does occur in this country. In local elections with small margins of victory, fraud is especially able to be the deciding factor.

In this case, Colen’s father won the primary by a count of 273 to 161 votes and is currently a candidate for one of five council seats in the general election.

Unfortunately, Indiana’s voter identification law, which was upheld by the U.S. Supreme Court in 2008, does not currently cover absentee voting. Such a requirement might have prevented this type of abuse from occurring.

An excellent model would be Kansas’ voter identification law. Under the Kansas SAFE Act, voters must provide photographic identification to vote at the polls. A few of the accepted forms of identification include driver’s licenses, state identification cards, U.S. passports, student IDs, and concealed handgun licenses.

To vote absentee, one must include a copy of an accepted form of photo identification, or provide a full Kansas driver’s license or non-driver ID number when requesting the absentee ballot or returning the voted ballot.

As the Colen indictment and numerous other cases show, voter fraud is not limited to the physical polls. Often it involves absentee ballots, which have been called the “tool of choice” of vote thieves.

Indiana should address voter fraud more comprehensively, as Kansas has done, by extending its voter ID law to cover absentee ballots as well as in-person voting.

Unfortunately, as the U.S. Supreme Court said in the Indiana voter ID case, the United States has a long history of voter fraud that has been documented by journalists and historians.

The Heritage Foundation has catalogued many recent instances of voter fraud across the nation in a new voter fraud database. Notorious examples include former Indiana Secretary of State Charlie White, who listed his ex-wife’s home address as his primary home in order to vote and be paid as a councilman in a district he did not reside in.

Or Butch Morgan Jr., who received a year in prison after forging over 200 signatures of registered voters with co-conspirators on the petition to place Barack Obama and Hillary Clinton on the Indiana Democratic Primary ballot in 2008.

Our right to vote is the most basic right we have because it protects all our other rights. It is sad to think that a uniformed officer of the law may have violated the public trust to steal votes.

It is fortunate that this particular fraud was detected, but it would have been even better if it had not occurred. Indiana needs to improve its voter integrity procedures, so abuses like this don’t happen again.