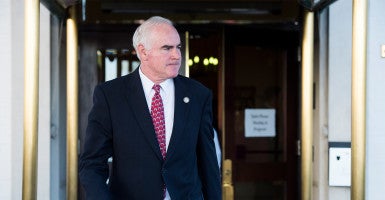 Rep. Patrick Meehan is not fond of giving up.

“I’d like to have [Obama] administration officials over telling us why they believe it’s in the best interests of the United States of America to return money to terrorists who may use it to create more victims,” Meehan, R-Pa., said of his legislation to force Iran to pay for acts of terror it sponsored.

The bill—called the Justice for Victims of Iranian Terrorism Act and likely to go to a vote Wednesday—is a pointed response to President Obama’s nuclear deal with Iran, which narrowly cleared Congress.

Meehan’s legislation signals that Republicans aren’t done fighting back against the deal, even if they can’t stop it.

Leaders from the seven nations, including Iran, that reached the nuclear deal met Monday at the United Nations to discuss its finalization, outlining an early 2016 “implementation.”

At that meeting, Iranian President Hassan Rouhani praised the agreement as the beginning of “a new chapter that has started in Iran’s relations with the world.”

As world leaders lauded the pact, Meehan introduced his bill in Washington.

In essence it demands that, before economic sanctions against Iran are lifted, the Islamic regime pay victims of state-sponsored terrorism about $43 billion owed as the result of more than 80 rulings by federal judges.

“We’re putting our victims to the side if we enable these dollars to be returned to Iran without any attachment to them,” Meehan said in a telephone interview with The Daily Signal.

Meehan said allowing Iran access to previously frozen accounts almost guarantees families of victims such as Chief Petty Officer Robert Stethem will never see millions of dollars already awarded to them by judges. Stethem was executed by Hezbollah terrorists in a 1985 hijacking that reportedly was funded by Iran.

Meehan dubs his effort Not One Cent.

For the Iran deal to move forward, the Pennsylvania Republican argues, Obama should have to waive the right of victims and their families to the funds awarded. Meehan said the president either should “certify to Congress that Iran is no longer engaged in acts of terror” or “state that it’s in the best interest [of] the United States of America” to waive the judgments.

Look, these are Marines who died protecting our barracks, these are American citizens who were sitting in cafes in Israel, these are people who were hijacked in planes and murdered in cold blood after being tortured. It’s some small measure of accountability that [Iran] should be required to pay [these families] before the very money we now have some influence over is returned.

Meehan also argues that a precedent exists: In 2008, President George W. Bush refused to lift sanctions against Libya until victims of Libyan-funded terror, including the Lockerbie bombing, were awarded reparations.

“If it has been done in the past, why wasn’t it done this time?” Meehan said. “I think that’s a legitimate question to ask.”

Will he continue to fight the nuclear accord if his bill doesn’t pass?  Meehan suggested other Republicans may step in:

There are other conversations going with state attorneys general who have their own sanction regimes in place that would be affected [by the deal]. So there could be other ways in which other issues similar to this will be raised if this deal moves forward.