Is Russia Ramping Up Military Involvement in the Middle East? 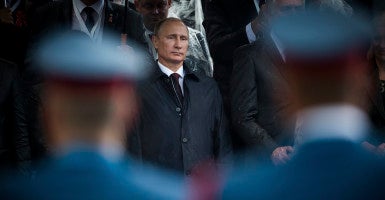 As if Syria wasn’t nasty enough after four years of bloody civil war—a brutal Syrian regime, Islamic State barbarity, an Iranian and Hezbollah influx, and the presence of al-Qaeda’s Nusra Front and its bomb-building Khorasan group.

Reports indicate that Moscow has deployed a military expeditionary force of soldiers and equipment to Syria to support the government of Syrian President Bashar Assad.

First, Damascus is a longtime ally of Moscow, going back to the Cold War. With the Assad regime teetering on the brink of collapse (despite support from Iran and Hezbollah), some help from Moscow could keep Damascus from imploding.

Of course, this isn’t altruism on Russia’s part; strategically placed Syria gives Russia a window into the Middle East, handing Moscow influence and power in the region.

Indeed, many people don’t realize that Moscow has a naval base in Syria at Tartus, giving Russia’s Black Sea Fleet access to the Mediterranean Sea. No need to worry about NATO ally Turkey’s maritime chokepoints (that is, the Bosporus Strait).

Not a bad idea for Russia at a time when oil and natural gas prices are tanking and punitive economic sanctions from Russian actions in eastern Ukraine and Crimea are having an emptying effect on the Kremlin’s coffers.

Of course, there’s also no doubt that the Russians feel that pounding—or helping to pound—the Islamic State (and possibly al-Qaeda) is a good idea, since some Russians have reportedly gone to join the fight in Syria and Iraq—and could return.

Probably more important, some analysts believe that both the Islamic State and al-Qaeda have affiliates in Russia’s Caucasus region, so dealing with them in Syria is a whole lot better than dealing with them at home.

Lastly, one can’t help but think that Russia’s movement into Syria has something to do with the United States. The relationship is still quite tense, and the rivalry that Moscow feels toward Washington hasn’t ended, despite cooperation on the Iran nuclear deal.

Russia’s intervention isn’t without risk for Moscow, of course, but it certainly complicates already troubled American policy deliberations and actions over the problem of Islamist extremism in Syria and Iraq.

For instance, how, where, in what numbers, with whom, and at what level of intensity will the Russians engage militarily? How will this affect the U.S.-led coalition’s air campaign? (News outlets report possible U.S.-Russia military-to-military talks on Syria.) Will the Assad regime survive? And so on.

Moscow must also be relishing the notion that Washington isn’t welcoming this latest example of Russian “assertiveness” that highlights the sad Syrian situation and the concerns about progress in the campaign against ISIS—to say the least.

Of course, you could say the intervention by Putin & Pals is just the latest chapter in Team Obama’s failing policy playbook on Syria. But, in truth, it’s not clear the White House really has much of a Syria policy playbook to tuck that chapter into.