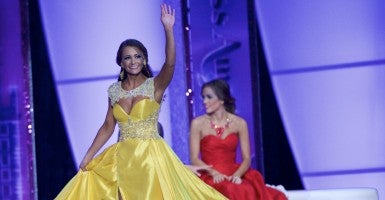 And if we don’t give that funding to Planned Parenthood, those women will be out of health care for reproductive causes.

Nor is this a recent development. It’s not just beauty pageant contestants who are confused about what Planned Parenthood does: President Barack Obama said in one of the 2012 presidential debates that “millions of women all across the country … rely on Planned Parenthood … for mammograms.” When FactCheck.org looked into Obama’s claim, it reported that “Planned Parenthood health centers do not offer mammography.” Thankfully, most Americans, unlike Robison, understand that there’s no need to continue funding an organization like Planned Parenthood. Seventy-eight percent of voters agree that “[g]overnment should not be in the business of funding organizations that harvest and sell baby parts from aborted children,” according to a poll commissioned by The Heritage Foundation’s American Perceptions Initiative. Furthermore, 72 percent of voters agree that “taxpayer dollars would be better spent directed to the more than 13,000 health centers and hospitals providing comprehensive women’s health care.”

We can make sure women have access to health care without using taxpayer dollars to fund an organization responsible for around one out of every three abortions in the United States.  There’s no reason taxpayers dollars should go to an organization that could be behind the murder of a little girl who, in a more humane world, could have grown up to be Miss America herself.