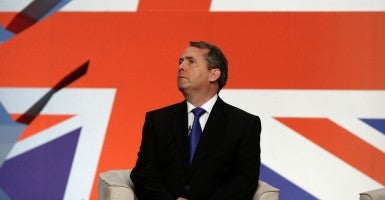 The nuclear agreement between Iran, the U.S. and five other world powers merely places Tehran’s nuclear ambitions “on hold” and undercuts the international community’s ability to condemn the regime if it violates the deal, the United Kingdom’s former defense secretary said Thursday.

Liam Fox, a conservative member of Parliament, said the P5+1 “caved” to Iran’s demands by conceding to immediate sanctions relief rather than implementing the West’s original condition of a gradual, rewards-based sanctions lift.

“We’ve given everything away at the outset and it’s all predicated on hope, a hope that they will change,” he said.

The $150 billion Tehran is estimated to receive in unfrozen assets, he said, will allow the regime to rapidly update its aging military and civilian infrastructure, calling it “ridiculous” to argue Iran will use most of the money to pay off debts.

Iran’s violent proxies, including Hezbollah, Hamas and the Assad regime in Syria, will also profit from the sanctions relief, Fox continued.

“If [Iran] regarded them as a priority for funding when they were already being very tightly squeezed by financial sanctions, then they’re likely to see them as prime candidates for extra funding when the tsunami of unfrozen assets hits them.”

Given the scope of money Tehran is expected to receive, Fox said the impact of future sanctions would likely diminish over time, expressing “extreme skepticism” of the agreement’s insurance against cheating in the form of snapback sanctions.

Once domestic industrial interests begin to operate and make profits in Tehran, Western governments will find it difficult to reimpose sanctions even if Iran violates the accord, he added.

Fox said the P5+1 negotiators also bowed to Iran’s demands by including an embargo lift on ballistic missile shipments into Tehran in the final accord.

To him, the “greatest surrender” of the international community was in the final inspection requirements, which leave investigations of suspicious sites in the hands of the United Nations’ International Atomic Energy Agency.

“Anything other than totally unrestricted and unfettered access is unacceptable because we all know in light of the Iranians behavior in the past how they manipulate any weakness in the terms of the IAEA’s access.”

He called the agreement a “fulfillment of the Iranians wish list” that was about “politics more than it was about security.”