How NDAA Could Impact US Missile Defense 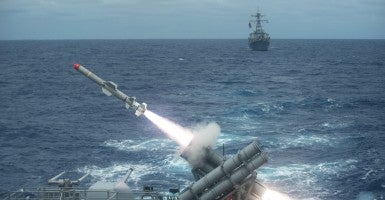 The U.S. House of Representatives recently took a first step to enact the National Defense Authorization Act (NDAA) for the fiscal year 2017 into law. The bill is one of the major congressional vehicles to advance policies related to U.S. national security issues.

The NDAA advances several important nuclear weapons and missile defense policy positions. For example, the bill places limits on modernization of equipment of the Russian aircraft under the Open Skies Treaty unless certain conditions are met, including Russia permitting overflight over Moscow, Chechnya, Abkhazia, South Ossetia, and Kaliningrad without restriction and without inconsistency to requirements under the Open Skies Treaty.

Additionally, the NDAA calls for developing military options in response to the Russian violations of the Intermediate-Range Nuclear Forces Treaty and with some exceptions limits cooperation with Russia unless Russia ceases its occupation of Ukraine. These are good policies. The United States should not reward Russia’s belligerent international behavior.

The NDAA calls for a limitation of funds available to extend the New Strategic Arms Reduction Treaty (New START) unless certain conditions are met, including producing a National Intelligence Estimate (NIE) of the Russian nuclear doctrine, Moscow’s nuclear capabilities and compliance with arms control agreements.

These requirements are prudent, particularly considering that the New Strategic Arms Reduction Treaty is lopsided in Russia’s favor. Under the Treaty, Russia continues to expand its nuclear arsenal while the United States continues to decrease its. A comprehensive assessment of Russia’s nuclear doctrine and capabilities is overdue.

The NDAA requires the administration to comprehensively review U.S. missile defense strategy. As the ballistic missile threat continues to mature, delays caused by the administration’s program cancellations and policy reversals have the potential to undermine U.S. security in the future.

The NDAA also underscores the congressional desire to move away from the Mutually Assured Destruction policies of the Cold War. The NDAA calls for a change in the National Missile Defense Act of 1999 by recognizing that ballistic missile defenses are technologically feasible, which has the United States proven on numerous occasions since the system. The NDAA also recognizes the need to protect the United States from a ballistic missile defense attack.

The change makes sense considering the maturation and an increase of complexity of a ballistic missile threat since 1999.