The Government Shutdown Will Further Weaken Our Military 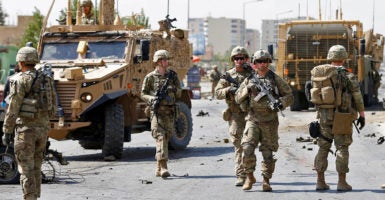 U.S. and NATO troops arrive at the site of a car bomb attack in Kabul, Afghanistan, Sept. 24, 2017. (Photo: Omar Sobhani/Reuters/Newscom)

Congress faced a number of bad options on Friday, when government funding expired for the third time this fiscal year.

But lawmakers picked the worst option of all for our military and national security: they decided to let the government shut down.

This decision will be incredibly damaging to our national security and to the men and women who work to keep us safe.

When Secretary of Defense James Mattis discussed on Friday the effects that a shutdown would have on the Department of Defense, he made multiple references to the stoic nature that is required of our warfighters when faced with trying times. All their stoicism will now be tested.

During a government shutdown, employees who are necessary for ensuring the safety of American lives and the protection of property are exempt, and have to continue working. This applies to all of our active-duty military personnel and, according to Mattis, close to half of the civilian employees at the Pentagon.

Everyone else is furloughed and stays home without pay, unless Congress specifically makes provisions for them to be paid. In 2013, Congress made such provisions. But so far, this is not the case in 2018.

It is up to the Pentagon’s senior leadership to determine who continues working and who gets furloughed. This takes time away from all the other critical challenges that the Department of Defense faces.

And decisions like these inevitably cause leadership problems, as furloughed employees wonder why their contributions are less valued than those who are not furloughed.

During a shutdown, most people who work to maintain our ships, airplanes, and tanks will be forced to stop their work, thus further delaying the upkeep that is necessary to return those platforms to action.

Acquisition programs will also be slowed or stopped, as the necessary officials will be absent. Training for reservists and the National Guard will also have to stop. This will undoubtedly add to the current readiness problems that already plague our armed forces.

These are men and women who chose to put on the uniform and risk their lives in defense of the country they believe in. In return, we, as a nation, have allowed their funds to dry up and have asked them to stoically show up to work without access to the resources they need.

All of this, despite the fact that Congress has already agreed on defense spending levels by wide margins.

Ironically, the congressional debate over funding took place on the same day that Mattis unveiled the new national defense strategy to the public. At multiple points, the strategy mentions the need for sustained, predictable, and increased investments in our nation’s armed forces to ensure that we are capable of meeting the challenges we face.

But when Congress decided to let defense funds lapse at the stroke of midnight of Jan. 19, it made sure that a sustained, predictable, and increased defense budget would be even harder to achieve.

Similarly, at the same time Mattis was outlining his vision for the future of our national defense, his deputy, Patrick Shanahan, issued guidance to the Pentagon on how to continue operations during a government shutdown.

Even though that guidance expressed hopeful words that Congress might be able to avoid a funding lapse, those hopes were dashed at midnight on Friday.

Congress has failed the American people and has been unable to fulfill its constitutional duty to provide for the common defense. This failure will be felt most acutely by our men and women in uniform.

It was an entirely avoidable situation, but instead of steering away from the cliff, 49 senators chose to drive right off of it.