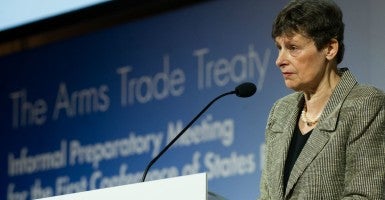 That same question occurred to me on Tuesday, when China made it clear that it’s not likely to sign or ratify the controversial Arms Trade Treaty any time soon.

The answer to the question this time seems to be President Obama.

The Arms Trade Treaty regulates the international trade in conventional weapons. Seventy-two countries have ratified the treaty, while 59 have signed but not ratified. I’m in Cancun, watching the first meeting of all those nations.

The U.S. is here as a signatory of the treaty; China’s attending as an observer.

China has a distinct style in multilateral meetings such as this – smooth, seemingly cooperative, and yet quietly menacing.

The treaty’s proponents had hoped that China was on the verge of signing the treaty. But this week, China made clear that they’re not going to accede to it any time soon.

So why isn’t China on board?

Well, only they know for sure. But China takes its place in international organizations, and their formal rules, very seriously.

It doesn’t want to participate in anything that could commit China by majority rule. It takes its sovereignty very seriously too.

When the negotiations for the Arms Trade Treaty began, the Obama administration promised that they’d be conducted by consensus. In the U.N., that means that no one objects.

But when the negotiations couldn’t reach a consensus agreement, the U.S. supported jumping to the U.N. General Assembly, which adopted the treaty by majority rule.

The issue isn’t so much that China’s worried about the Arms Trade Treaty, or, indeed, that this treaty would actually change China’s behavior.

But as the Chinese delegate said, the move to the General Assembly “sets a bad precedent.”

China doesn’t want the next big international negotiation to promise it a veto, only to suddenly adopt majority rule when it turns out that no agreement is possible.

Now, I don’t think the treaty’s going to do anything useful. Indeed, it could do a lot of damage.

But if you believe in the treaty, one nation you really want to get on board is China. Without China, a major international arms supplier, the treaty simply has no credibility.

On the Arms Trade Treaty, it was Iran, North Korea, and Syria that blocked agreement.

But next time, it could be China that’s standing in the way of the majority. And China doesn’t want to set itself up to be tricked and outvoted next time.

So what did the administration get by jumping to the General Assembly?

But it also lost a lot.

It broke its own red line that it would only negotiate the Arms Trade Treaty on the basis of consensus. It set a terrible precedent that can be used against the U.S. in the future. And, of course, it badly damaged any chance of getting China on board.

It just goes to show that an administration shouldn’t set out red lines it doesn’t intend to keep. Especially a red line on consensus.

After all, the consensus system doesn’t just protect China. It also protects us.

Jettisoning consensus may have got the administration its treaty, but it wasn’t good for us. And it lost China.