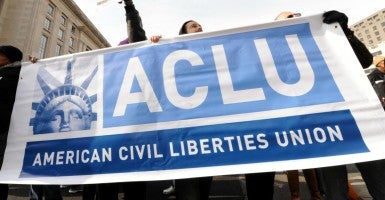 More than 2,200 parents have already applied to participate in the ESA option, which provides students with a portion (roughly $5,100 annually) of the funds that would have been spent on them in their public school in an ESA account that they can then use to pay for a variety of education-related services, products, and providers.

They can use their ESA to pay for private school tuition, online learning, special education services and therapies, textbooks, curricula, and a host of other education-related expenditures. As the name implies, parents can also save unused funds, rolling dollars over from year-to-year to pay for future education costs.

The ACLU’s lawsuit alleges that the ESA program “violates the Nevada Constitution’s prohibition against the use of public money for sectarian (religious) purposes.” Yet ESA funds go directly to parents, who can then choose from any education option that is right for their child.

The Foundation for Excellence in Education explains that the Arizona Court of Appeals noted in a similar case in 2013,

“The ESA does not result in an appropriation of public money to encourage the preference of one religion over another, or religion per se over no religion. Any aid to religious schools would be a result of the genuine and independent private choices of the parents. The parents are given numerous ways in which they can educate their children suited to the needs of each child with no preference given to religious or nonreligious schools or programs.”

The Institute for Justice, which will be defending the ESA option, is confident it does not violate the state’s constitution.

Tim Keller, a senior attorney with the Institute for Justice, declared that,

“Nevada’s Education Savings Account (ESA) Program was enacted to help parents and children whose needs are not being met in their current public schools, and we will work with them to intervene in this lawsuit and defeat it.”

“The United States Supreme Court, as well as numerous state supreme courts, have already held that educational choice programs, like Nevada’s ESA Program, are constitutional. We expect the same from Nevada courts.”

Education director for the Goldwater Institute, Jonathan Butcher, had this to say,

“Every child deserves the chance at a great education and the opportunity to pursue the American Dream. Lawsuits such as this challenge parents’ ability to help their children succeed,”

“Nevada has a unique law that makes flexible learning options available to every child attending a public school and a treasurer that has committed his team to listening to public comments and designing a successful education savings account program. Opponents should give students the chance to succeed with these accounts.”

Education savings accounts are one of the most promising paths forward on choice in education. They enable families to direct every single dollar of their child’s state per-pupil funding that is deposited into their account to a wide variety of education options. Arizona became the first state, in 2011, to enact the ESA model.

Today, five states, including Arizona, Mississippi, Tennessee, Florida, and Nevada have ESAs in place, with Nevada’s being notable because it will be available to every single child currently enrolled in a public school. It is the first program universally available to all public school students. Arizona, which has the longest-running ESA option, has had great success for participating families.

As Marc Ashton, father to Max Ashton who is legally blind and used the ESA prior to finishing high school explained,

“A blind student in Arizona gets about $21,000 a year. That $21,000 represents what Arizona spends to educate a student such as Max in the public-school system.”

“We took our 90 percent of that, paid for Max to get the best education in Arizona, plus all of his Braille, all of his technology, and then there was still money left over to put toward his college education,” Marc explains. “So he is going to be able to go on to Loyola Marymount University, because we were able to save money, even while sending him to the best school in Arizona, out of what the state would normally pay for him.”

That type of customization and innovation is what the ACLU is threatening now in Nevada. It’s a shame that special interest groups continue to threaten choice in education, when choice is what is needed so badly, for so many.