School Choice Gets a Big Win in Nevada Court Decision 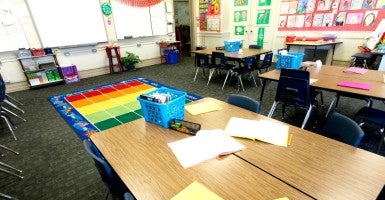 On Wednesday, families got one step closer to finally being able to access the most expansive education choice option of any state.

Blaine amendments are prohibitions that exist in over half of all state constitutions that restrict public funding from flowing to religious schools.

They many different amendments were named after Maine Sen. James G. Blaine, who, in 1875, introduced an amendment to the U.S. Constitution to the same effect. His amendment failed, but 38 states went on to adopt similar Blaine amendments and related compelled support clauses.

Consideration of the [Blaine] amendment arose at a time of pervasive hostility to the Catholic Church and to Catholics in general, and it was an open secret that sectarian was code for Catholic.

As we wrote in 2014 in The Journal of School Choice:

If left to stand, these ignoble 19th century amendments will remain major impediments to the growth of school choice, and will be the legal battleground on which proponents and opponents of education reform will spar in coming years. The U.S. Supreme Court has overruled the logic behind the amendments and disavowed their ‘shameful pedigree’.

Indeed it was a Blaine amendment, adopted in Nevada in 1880, that was the basis for the ACLU’s suit against the most innovative and expansive ESA option in the country. Yet as Justice Thomas stated in the Helms decision, “this doctrine, born of bigotry, should be buried now.”

In dismissing the Duncan case, District Judge Eric Johnson did just that.

Johnson noted in his decision that, “The state has no influence or control over how any parent makes his or her genuine and independent choice to spend his or her ESA funds.”

But it’s not a total victory for parents. A separate case, Lopez v. Schwartz, is currently in front of the Nevada Supreme Court. Lopez is a case centered on funding uniformity, and was the basis for an injunction issued by a Carson City district court judge, and which remains in effect, barring students from accessing the program.

The Nevada attorney general has appealed the injunction to the state Supreme Court.

More than 4,000 education savings accounts had been awarded to families since August 2015, yet the recipients will not be able to use the funds as long as the injunction stands.

Dismissing Duncan is a huge first victory toward enabling families to access their education savings accounts.

Some 453,000 children are eligible, and if they choose, can instead use an education savings account to pay for private school tuition, online learning, special education services and therapies, textbooks, curricula, private tutors, and any other education-related service, product, or provider.

Families are now one step closer to being able to use their accounts. And hopefully they won’t have to wait much longer. The gears of the legal system can churn slowly, and as they do, children are missing the opportunity to access life-changing education options.