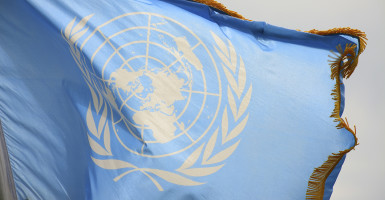 These goals have a multitude of problems. (Photo: Imnature / iStock)

Of course, this is vastly overstated.

In claiming credit for progress in fighting poverty, the United Nations confuses cause and effect. For example, three-quarters of the gains made in reducing extreme poverty are attributable to economic growth in China and India, not to any particular effort by the United Nations.

Moreover, an independent study assessing best and worst practices among aid agencies ranked U.N. agencies among the least effective performers. Given that track record, the United Nations should be the last choice for directing global aid efforts.

Still, the MDGs have succeeded in one thing: getting nations to boost spending on foreign aid. The Organization for Economic Co-operation and Development reports that official development assistance soared from $60 billion in 2000 to $167 billion in 2013.

To recap, then, measurements such as the MDGs can help assess progress in economic development and rally additional resources to that purpose, but they do not actually drive development. This makes the United Nation’s new plans for measurement all the more alarming.

With its MDGs slated to expire at the end of this year, the U.N. General Assembly is poised to institute a new set of development criteria called Sustainable Development Goals (SDGs). Think of them as MDGs on steroids—and mush. Whereas the MDGs had eight goals with 18 targets, the SDGs, as currently drafted, establish 17 goals with 169 targets.

The targeting is different, too. MDG targets were primarily aligned with pre-existing development objectives such as improving primary school completion rates and access to safe drinking water and sanitation. Critically, they heavily focused on data, so that progress could be measured objectively.

But only some SDGs are similarly focused and measurable. Many are vague and subjective, resembling an unedited compilation of the wish lists from the entire development community.

These are avowals of commitment, not measurable goals. The upside is that they are “achievable” because of their very vagueness.

That cannot be said of other goals, which, frankly, are wishful thinking. For instance, it is not enough to improve conditions; the SDGs aim grandly to “end poverty in all its dimensions,” “end hunger,” “end child labour in all its forms,” “eliminate gender disparities,” and “eliminate all forms of violence against all women and girls in public and private spheres.”

Wonderful aspirations, yes. Realistic goals, no. As much as we try, Utopia will remain beyond our reach, and it is certain that we will never arrive there following a U.N. roadmap.

Also common are political agendas masquerading as development goals. The introduction is packed with reaffirmations of commitments to implement environmental agreements like the Rio Declaration on Environment and Development, Agenda 21, and the Plan of Implementation of the World Summit on Sustainable Development. The specific goals include calls to:

Taken in whole, the SDGs are, quite simply, a mess—broadly unusable as a framework for development. They do, however, hold great promise for fulfilling the real purpose of their drafters: to justify the inevitable calls of development professionals and developing countries for more funding.

Any guesses as to how much of the $3-trillion bill the United States will be expected to foot? No matter how generous Washington is and plans to be, at Turtle Bay the answer will always be “not enough.”