50 Years Ago, a White Seminarian Sacrificed His Life to Save a Black Teen 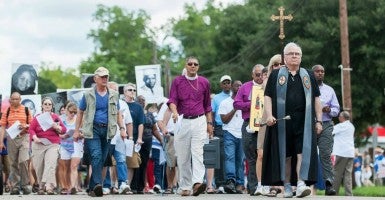 Marchers walk in an annual pilgrimage in Hayneville, Ala., in honor of Jonathan Daniels. (Photo: Grace Episcopal Church/ Facebook)

Earlier this week, hundreds gathered in Hayneville, Ala., to remember the life of civil rights activist Jonathan Myrick Daniels.

Daniels, 26 at the time of his death, was shot outside a grocery store in Hayneville on Aug. 20, 1965, by part-time deputy sheriff Tom Coleman.

Coleman had aimed his weapon at 17-year-old Ruby Sales, a black civil rights activist and acquaintance of Daniels. Daniels pushed Sales to the ground, taking the bullet intended for her to his chest. He died instantly.

“One of the most heroic Christian deeds of which I have heard in my entire ministry was performed by Jonathan Daniels,” said the Rev. Martin Luther King Jr. at the time.

Daniels, of Keene, N.H., was a student at the Episcopal Divinity School in Cambridge, Mass., at the time of the shooting. He had chosen to study ministry after graduating from the Virginia Military Institute and was also pursuing a degree in English literature at Harvard University. Months before his death, in March, Daniels participated in the famed march from Selma to Montgomery, Ala. He decided to join the demonstration after King called for clergy involvement.

“Something had happened to me in Selma, which meant I had to come back. I could not stand by in benevolent dispassion any longer without compromising everything I know and love and value,” Daniels said, according to archived documents from the Episcopal Church. “The imperative was too clear, the stakes too high, my own identity was called too nakedly into question. … I had been blinded by what I saw here (and elsewhere), and the road to Damascus led, for me, back here.”

Daniels then spent most of the summer of 1965 in Alabama, helping with a voter registration project. The tragic shooting happened shortly after the Voting Rights Act was passed and signed by President Lyndon B. Johnson in early August.

The shooting was not Daniels’s first run-in with Alabama police.

On Aug. 14, he was arrested in Fort Deposit, Ala., for his participation in a protest against white-only policies at a local store. He was taken with a group of 22 men and women to the Hayneville jail by garbage truck. At the time, the city was known for its especially violent treatment of blacks.

From prison, Daniels sent his mother a birthday card, which she would not receive until the day after her son’s death.

After their release, Daniels; Catholic Rev. Richard Morrisroe, also 26; Ruby Sales; and another black teenager named Joyce Bailey, 19, headed to the local store for a soda.

It was there that Daniels and Coleman ran into one another. Morrisroe was also shot, but not fatally, as he tried to get Sales and Bailey to safety.

For his role in the shooting, Coleman was charged but eventually acquitted of all wrongdoing by an all-white jury.

In celebration of Daniels’s life, Aug. 20 has been marked a holiday on the Episcopal Church calendar. He is honored as one of the 15 martyrs named in the Chapel of Martyrs at England’s Canterbury Cathedral. A sculpture of Daniels also sits inside the Washington Cathedral in Washington, D.C.

Sales and Morrisroe are the only current living survivors from the shooting.

“He walked away from the king’s table,” Sales told the Washington Post. “He could have had any benefit he wanted, because he was young, white, brilliant and male.”

Even though 50 years have passed since Daniels’ sacrifice, racial turmoil and unrest continue to plague the United States.

“Race relations today in the United States are an extension of that time period,” Sales told the Associated Press. “Tom Coleman was able to kill Jonathan Daniels under the cover of the law. Despite the fact that it has been 50 years, we are still operating in a culture where police and vigilantes can murder African-Americans.”