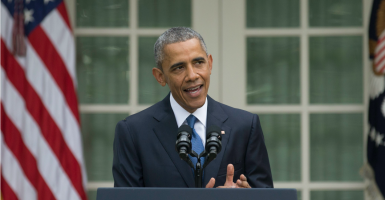 The Obama administration is proposing new regulations to reduce methane emissions for the oil and gas industry 40 percent to 45 percent from 2012 levels by 2025. Here are four things you need to know.

Indeed, the Occupational Safety and Health Administration (OSHA) does not list any exposure threshold for methane, nor does the agency list any long-term health effects.

As such, there is no health or environmental incentive behind the administration’s proposal to cut methane emissions from the oil and gas industry.

2. Regulations target the energy sector, which impacts all American families and businesses. The purpose of the administration’s regulation is to reduce methane’s impact on the climate.

However, the regulations target only the oil and gas industry despite the fact that in the United States, the single largest source of man-made emissions comes from enteric fermentation (that’s cow-made emissions).

The next most predominant source is natural gas systems, followed by landfills, coal mining, manure management, and petroleum systems.

Wetlands cause nearly 80 percent of all naturally occurring methane output, followed by termites and leakage from the ocean surface.

Families will feel the pain of higher energy prices not just at the pump and through higher electricity rates, but also at the grocery store and the home improvement store.

Globally, 60 percent of methane emissions are man-made, while 40 percent occur naturally. But the administration isn’t going after cows or wetlands (nor should they), but instead regulating only the oil and gas industry.

3. The market is already driving emissions reductions. According to the Environmental Protection Agency, “[m]ethane (CH4) emissions in the United States decreased by almost 15 percent between 1990 and 2013. During this time period, emissions increased from sources associated with agricultural activities, while emissions decreased from sources associated with the exploration and production of natural gas and petroleum products.” The agency reports that emissions from natural gas systems have dropped 17 percent since 1990, and field production emissions have dropped 40 percent since 2006.

The reason for declining methane emissions is simple. Energy producers have an incentive to capture and sell methane, the main component in natural gas, because it has valuable economic use for the production of electricity and heat. In fact, the EPA cites “voluntary reductions” as the primary reason emissions have fallen.

Despite the administration’s effort to build off the private sector’s voluntary actions, federal regulations institute burdensome, complex processes that will likely slow the industry’s current efforts to reduce emissions. Furthermore, regulations will result in additional compliance costs and force the industry to implement control technologies that are not profitable.

4. It’s another component to a costly, ineffective climate agenda. The proposed methane regulation is only one part of the administration’s climate plan, which, taken as a whole, will drive up prices in the United States yet achieve no meaningful impact on global temperatures.

The EPA recently finalized regulations for new power plants as well as its Clean Power Plan, with carbon dioxide emission reduction targets for each state (excluding Alaska, Hawaii, and Vermont) in hopes of reducing overall power plant emissions to 32 percent below 2005 levels by 2030. The federal government has also implemented climate regulations for light- and heavy-duty vehicles and has taken steps to regulate greenhouse gas emissions from airplanes.

Cumulatively, the regulatory onslaught sounds like a lot. And it is, economically speaking. The overwhelming majority of America’s energy needs are met through coal, natural gas, and oil.

Each regulatory blow inflicted by the administration raises compliance costs and consequently raises energy prices for American families and businesses.

Environmentally speaking, the cumulative regulatory impact will not amount to much, if anything at all. The U.S. could grind the economy to a halt and cut all of its emissions, and the averted global warming would still be less than two tenths of a degree Celsius over the next 85 years.

The federal government’s proposed methane regulations is clearly a targeted attack on affordable energy source, where the costs will be borne by all Americans—and with nothing to show for it.