What Alexander Hamilton Can Teach Modern America About Constitutional Statesmanship 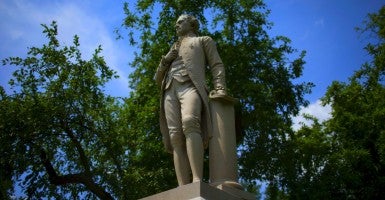 Events of 2015—both good and bad—have pushed Alexander Hamilton back into the spotlight.

On a good note, he is the subject of a highly praised and very successful New York musical.

Unfortunately, in addition to this, the Treasury Department floated the possibility of taking him off the ten-dollar bill.

But even the bad side did not turn out to be completely bad, because this plan prompted prominent Americans to step forward and defend Hamilton’s contributions to his adopted country and his worthiness to be honored on its currency.

It’s gratifying to see a founding father remembered in this way. If our reflections on Hamilton are to be fruitful, however, we need to go beyond his contemporary celebrity and the general sense of his accomplishments on which it is based.

We need to think seriously about his political thought and what we can learn from it. As I argue in a new First Principles essay, Hamilton offers a model of constitutional statesmanship that is still relevant to us.

This will come as a surprise to some conservatives. Many on the right feel an instinctive preference for Hamilton’s great political rival, Thomas Jefferson.

Jefferson, after all, was the founding era’s leading advocate of strictly limited government, while Hamilton is remembered more as a defender of a broad interpretation of the government’s powers.

Since the preservation of limited government is one of contemporary conservatism’s most important aims, shouldn’t today’s conservatives take their bearings from Jefferson rather than Hamilton?

For Hamilton, Jefferson took a valid principle—limited government—and pushed it too far. Jefferson not only argued for a limited conception of the government’s powers, but in fact demanded that the government be guided by the narrowest possible interpretation of its powers.

Hamilton believed that this approach was misguided because it forgot that the Constitution aims to establish not only limited government, but also properly energetic government.

On one hand, we must not ignore constitutional limits in our pursuit of energetic government. On the other, neither should we insist on limits so narrow that they are fatal to the government’s ability to perform the functions entrusted to it—functions the energetic execution of which is essential to the country’s prosperity and security.

Hamilton’s constitutional statesmanship remains relevant to us today because the balance on which he insisted is still necessary in our own time.

Nevertheless, Hamilton would remind us that we should not let our ardor for limited government blind us to the necessity of an energetic exercise of the government’s legitimate powers.

Today’s government does many things it should not be doing, but that does not mean that we should try to deprive it of its essential powers in relation to the things that it has an obligation to do.

Because the federal government meddles in health care does not mean that we should ask it to wage war, defend national security, or protect our borders by the most minimal exercise of its powers.

Preserving the regime the founders gave us requires that we respect the proper limits on the government’s power but at the same time recognize the need for an energetic exercise of its powers within their proper limits.

Alexander Hamilton brought all of his considerable intelligence to bear on this problem, and we can make ourselves more enlightened constitutionalists by studying how he grappled with it.