Problematic Women: Ladies, Know Your Worth 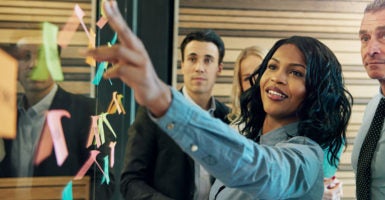 A woman presents at a meeting. (Photo: Getty Images)

This week on “Problematic Women” we talk to Heritage Foundation fellow and working mother of six Rachel Greszler about the so-called gender wage gap and the celebrities who continue to promote the debunked idea. Rachel tells how women can fight for ourselves in the workplace and the ways the free market is the greatest equalizer. We also break down Ms. Monopoly, a new version of the classic game that gives a leg up to female players.

—Discussing the student activists who have gone viral in their protests against climate change, we talk about the moral problems with using children as political mouthpieces.

—Our Problematic Woman of the Week is Scarlett Payton Bolar, born Sept. 12 to our co-host Kelsey Bolar. We give you an update directly from Kelsey on her daughter and where she got her name.

Listen in the podcast below.