Donald Trump Defends Planned Parenthood, Calls Abortions ‘Small Part of What They Do’ 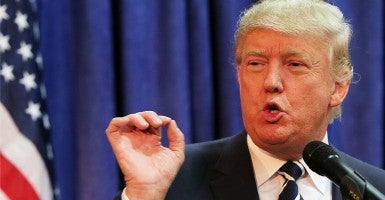 “We have to help women,” Trump told Fox News’ Sean Hannity in an interview that aired Tuesday night. “So we have to look at the positives, also, for Planned Parenthood.”

Trump said he opposes federal grants going toward Planned Parenthood’s abortion practices, but noted that abortions make up a “small part” of the organization.

“There’s two Planned Parenthoods, in a way,” he said. “You have it as an abortion clinic. Now that’s actually a fairly small part of what they do, but it’s a brutal part. And I’m totally against it and I wouldn’t do that. They also, however, service women.”

Planned Parenthood is the largest abortion provider in the nation, performing almost a third of all abortions in the U.S.

Hannity asked Trump why taxpayers should fund the group given its role in providing abortions.

He told CNN earlier in the day he would examine the Planned Parenthood’s practices to determine the “good aspects” that help women.

Federal law prohibits the more than $500 million Planned Parenthood receives in taxpayer dollars annually from going toward abortions. Trump maintained this position, saying he felt “strongly” about barring government funding from that aspect.

“Donald Trump seems to have realized that banning all abortions, shutting down the government, and defunding Planned Parenthood are extreme positions that are way too far outside the mainstream for even him to take,” Planned Parenthood spokesman Eric Ferrero said in a statement.