Almost a Third of Abortions Performed at Planned Parenthoods 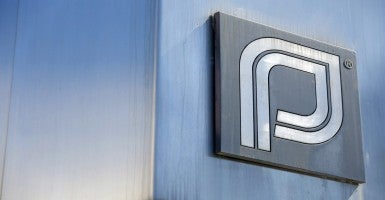 The Planned Parenthood logo outside a clinic in Boston. (Photo: Dominick Reuter/REUTERS/Newscom)

Planned Parenthood is performing almost a third of abortions in the United States, according to a new report by Americans United for Life.

The report, titled “The New Leviathan: The Mega-Center Report, How Planned Parenthood Has Become Abortion, Inc.,” shows that the nation’s largest abortion provider has gone from performing one in five abortions in the United States to nearly one in three.

Despite its growing abortion business, Planned Parenthood is treating fewer patients. Its client base has declined by almost 10 percent.

Planned Parenthood has opened “mega centers,” which AUL defines as “centers or offices of at least 10,000 square feet,” in 19 cities since 2004.

While the number of abortions performed by the organization has increased, its non-abortion services such as breast cancer screenings have been slashed by more than 50 percent.

Americans United for Life President and CEO Dr. Charmaine Yoest said in a statement that while Planned Parenthood “deceptively holds itself out as protecting women’s health, as it cuts legitimate health care in favor of abortion sales, while lobbying for more taxpayer largesse.”

Planned Parenthood receives over half a billion dollars from taxpayers each year, constituting about 40 percent of its overall revenue.

“Over the last 45 years, Planned Parenthood has become the expert in making money from ending lives,” Yoest said.

The great 17th century political philosopher, Thomas Hobbes, famously argued that the life of man was bleak—“solitary, poore, nasty, brutish, and short.” Men are driven by the desire for power, and the fear of other men’s power, to consent to a “social contract” with the powerful, sovereign Leviathan. Today, our culture has consented to a new Leviathan. Under the guise of the pursuit of equality, Planned Parenthood has leveraged women’s fears against them.

This story was updated to remove a chart comparing Planned Parenthood’s abortions vs. cancer screenings.