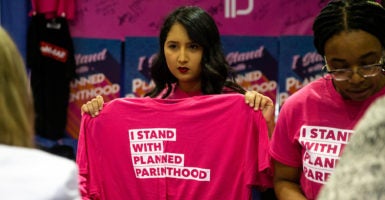 Shirts are given out at the Planned Parenthood booth on the first day of the 2019 California State Democratic Party Convention. (Photo: Kent Nishimura/Getty Images)

Planned Parenthood joined several other groups in suing the Trump administration on Tuesday over the “conscience” rule, which would allow health care workers to refuse to conduct abortions due to religious or moral beliefs.

The lawsuits were filed in Manhattan federal court over the rule that is set to go into effect July 22, reported Reuters.

The Department of Health and Human Services’ conscience rule “protects individuals and health care entities from discrimination on the basis of their exercise of conscience in HHS-funded programs,” according to the HHS website.

Among those suing the Trump administration to block the rule are “Planned Parenthood of Northern New England Inc, the National Family Planning and Reproductive Health Association and Public Health Solutions Inc.,” according to Reuters.

The organization said if the rule is passed, it could affect more than 613,000 health care centers around the country.

“Trust is the cornerstone of the physician-patient relationship,” Planned Parenthood president Leana Wen said in a statement. “No one should have to worry if they will get the right care or information because of their providers’ personal beliefs.”

A number of Democratic-leaning states and municipalities sued the U.S. government May 21 over the announced rule, according to The Washington Post.

HHS said it is prepared to defend the bill against its opponents, Reuters reported. The department did not respond to The Daily Caller News Foundation’s request for comment in time for publication.