3 Ways Planned Parenthood May Be Violating the Law 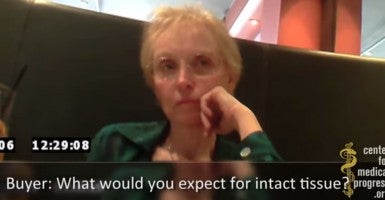 The undercover videos have raised questions about whether Planned Parenthood is acting in accord with the law. (Photo: Center for Medical Progress video)

Tony Bergida is a graduate of The Heritage Foundation's Young Leaders Program.

Many Planned Parenthood supporters have decried the Center for Medical Progress for releasing “highly edited” video, despite the fact CMP has also released the full, unedited videos. Planned Parenthood claims that is has broken no laws.

Yet a number of statements made in the undercover videos raise serious questions about whether some Planned Parenthood affiliates are potentially breaking laws relating to fetal tissue donation and gruesome partial-birth abortions.

1. Is Planned Parenthood receiving too much money in exchange for the body parts of unborn children?

In the U.S. code, 42 U.S.C. §289g-2 states that “[i]t shall be unlawful for any person to knowingly acquire, receive, or otherwise transfer any human fetal tissue for valuable consideration if the transfer affects interstate commerce.”

The statute also says that valuable consideration “does not include reasonable payments associated with the transportation, implantation, processing, preservation, quality control, or storage of human fetal tissue.” The issue hinges on whether Planned Parenthood receives compensation in excess of its actual costs.

Planned Parenthood denies receiving any “financial benefit,” saying in a July statement that “in some instances, actual costs, such as the cost to transport tissue to leading research centers, are reimbursed, which is standard across the medical field.”

In the second video released by CMP, Dr. Mary Gatter, president of the Medical Directors’ Council for Planned Parenthood, says, “Well, why don’t you start by telling me what you’re used to paying?” She also says, “Let me just figure out what others are getting. If this is in the ballpark, it’s fine. If it’s still low, then we can bump it up.” Gatter goes on to quip, “I want a Lamborghini.”

Dr. Savita Ginde, vice president and medical director for Planned Parenthood of the Rocky Mountains, talks of maximizing Planned Parenthood’s revenue: “I think a per-item thing works a little better, just because we can see how much we can get out of it.” Planned Parenthood doesn’t “want to get called on, you know, selling fetal parts across states.”

According to 42 U.S. Code § 289g–1, “… no alteration of the timing, method, or procedures used to terminate the pregnancy [can be] made solely for the purposes of obtaining the tissue.”

Gatter realizes this legal hazard: “[To] increase the odds that it will come out as an intact specimen, then we’re kind of violating the protocol that says to the patient, ‘We’re not doing anything different in our care of you.’” She further admits, in discussing abortion procedures, that “there are people who would argue that by using the IPAS instead of the machine, you’re slightly increasing the length of the procedure, you’re increasing the pain of the procedure.”

In the first video, Dr. Deborah Nucatola, senior director of medical services at Planned Parenthood, admits to changing her abortion technique in order to harvest more efficiently: “So then you’re just kind of cognizant of where you put your graspers… and I’m gonna see if I can get it all intact.”

… an abortion in which the person performing the abortion—(A) deliberately and intentionally vaginally delivers a living fetus until, in the case of a head-first presentation, the entire fetal head is outside the body of the mother, or, in the case of breech presentation, any part of the fetal trunk past the navel is outside the body of the mother, for the purpose of performing an overt act that the person knows will kill the partially delivered living fetus; and (B) performs the overt act, other than completion of delivery, that kills the partially delivered living fetus.

According to Planned Parenthood’s website, the two procedures that they commonly use for abortions are vacuum aspiration and D&E (dilation and evacuation). Both of these procedures require the uterus being emptied through suction, in addition to other instruments, generally making it rather difficult to collect a completely intact unborn child’s body. That raises questions of how Planned Parenthood may be able to obtain wholly intact bodies, particularly at later gestational age, without changing the procedure or performing partial-birth abortions.

A statement made by Nucatola in the first undercover video released suggests that Planned Parenthood may be violating the partial-birth abortion ban:

So then you’re just kind of cognizant of where you put your graspers, you try to intentionally go above and below the thorax, so that, you know, we’ve been very good at getting heart, lung, liver, because we know that, so I’m not gonna crush that part, I’m going to basically crush below, I’m gonna crush above, and I’m gonna see if I can get it all intact. And with the calvarium, in general, some people will actually try to change the presentation so that it’s not vertex, because when it’s vertex presentation, you never have enough dilation at the beginning of the case, unless you have real, huge amount of dilation to deliver an intact calvarium. So if you do it starting from the breech presentation, there’s dilation that happens as the case goes on, and often, the last, you can evacuate an intact calvarium at the end.

Planned Parenthood did not respond to requests for comment.