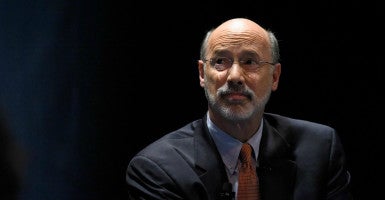 Wolf administration staff emails provided to the Tribune-Review show that Sari Stevens, the executive director of Planned Parenthood Pennsylvania Advocates and PAC, the legislative arm of the three Planned Parenthood affiliates in Pennsylvania, offered talking points to the governor’s aides on the videos, which she called information she wanted to remain among “friends.”

The story about the videos “has not reached mainstream media yet; we are trying to keep it that way,” Stevens wrote in an email.

In addition to the videos, the Tribune-Review reported that Stevens also provided talking points to the Wolf administration “on two other occasions.”

The undercover videos released by the Center for Medical Progress raised allegations that Planned Parenthood, the nation’s largest abortion provider, is trafficking the body parts of aborted babies.

Profiting from the sale of human organs is illegal in the United States. Spokespersons for Planned Parenthood have denied illegal conduct. The organization recently announced it will no longer accept “reimbursement” for donations of body parts to researchers.

Stevens and Wolf’s office did not immediately return The Daily Signal’s requests for comment.

Micaiah Bilger, the education director of the Pennsylvania Pro-Life Federation, told The Daily Signal, “It is very disturbing that Gov. Wolf is so close to a group being exposed for some horrific practices.”

“Many Pennsylvanians are outraged after watching undercover videos exposing Planned Parenthood trafficking aborted babies’ body parts and its staff talking over lunch about ‘crushing’ and ‘crunch[ing]’ babies in the womb. Even after the videos were released, Gov. Wolf continued to show unwavering support of this scandalous group by appointing a member of Planned Parenthood of Pennsylvania’s board as his chief of staff,” Bilger said.

The Tribune-Review reported that Wolf recently chose Mary Isenhour, a former Planned Parenthood of Pennsylvania board member, to become his chief of staff.

“Pennsylvanians are all too familiar with the results of pro-abortion politics in the governor’s office,” Bilger continued. “Just a few years ago, Philadelphia abortionist Kermit Gosnell was convicted of murdering newborns and killing a female patient in his filthy practice. Gosnell got away with his crimes for decades after pro-abortion Govs. Tom Ridge and Ed Rendell failed to inspect abortion centers. According to the Gosnell grand jury report, those administrations apparently believed that it was ‘better to leave clinics to do as they pleased, even though, as Gosnell proved, that meant both women and babies would pay.’”

“Pennsylvanians are right to be concerned about a new pro-abortion governor who maintains close ties to the abortion industry. Will Gov. Wolf side with his friends and turn a blind eye to abortion horrors, too?” Bilger added.

Cecile Richards, the chief executive of Planned Parenthood, once praised Wolf as “the first governor in the history of the country who was also a former Planned Parenthood clinic escort,” according to the Pittsburgh Post-Gazette.