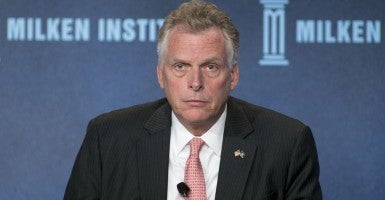 Virginia Governor Terry McAuliffe and his appointees to the Virginia State Board of Elections seem determined to ensure that felons and noncitizens can illegally register and vote in elections without getting caught.

In April 2015, Governor McAuliffe vetoed House Bill 1315, which would have required jury commissioners to retain information from individuals not qualified to serve as jurors for reasons that would also disqualify them from voting, such as

The bill was clearly intended to prevent illegal registration and voting by noncitizens, felons and others ineligible to vote in Virginia. Governor McAuliffe vetoed the bill, claiming in his veto explanation that he was “committed to protecting the voting and civil rights of Virginians” and that “additional study” was needed.

Nowhere in his explanation did Governor McAuliffe explain why such a logical, simple and straightforward bill needs more study or how it would violate the civil rights of Virginians. After all, it simply ensured that election officials had the same information that jury commissioners have on the status of individuals who are called for jury duty based on voter registration rolls.

In the meantime, illegal voting continues to occur in Virginia. In 2011, the Fairfax County Electoral Board notified the U.S. attorney for the Eastern District of Virginia and the U.S. Department of Justice of 278 registered voters who, when they got their driver’s licenses, had told the DMV that they were not U.S. citizens. Of these registered voters, 117 had in fact voted in state and federal elections, despite the fact that voting by a noncitizen is a misdemeanor punishable by up to one year in prison.

In 2013, Bonnie Nicholson pleaded guilty to forgery and election fraud in Virginia. Nicholson was a felon and was ineligible to vote but nonetheless registered and voted in the 2012 election. Apparently, McAuliffe wants noncitizens and felons who get caught in the jury system to continue to be able to vote.

McAuliffe’s appointees to the Virginia Board of Elections are now considering taking steps to further protect noncitizens and felons who are voting illegally. The Washington Post reports that the Board of Elections is debating changes that would eliminate the requirement that those registering to vote “check boxes to indicate whether they are U.S. citizens or felons whose right to vote has not been restored.”

Under current law, in order to register in Virginia, one must check boxes to answer questions about citizenship, felony convictions and mental capacity to vote. Under the proposed changes, leaving these boxes blank would not prevent an individual from becoming registered to vote.

According to the Washington Post, the chairman of the Board of Elections, James Alcorn, said that these proposed changes will “make it easier for eligible Virginians to participate in the electoral process,” and that the focus of voter registration should not be “whether the voter is able to complete the form,” implying that these questions are so confusing that they are somehow disenfranchising eligible voters.

Delegate James M. LeMunyon (R-Fairfax) responded: “Every first-grader in Virginia gets a work sheet from a teacher with boxes to check. If we’ve had this sort of rampant people-haven’t-been-able-to-check-boxes problem, I haven’t heard of that one.”

Below are the relevant parts of the Virginia Voter Registration Application Form, which, as LeMunyon suggests, are simple and straightforward.

But apparently, Chairman Alcorn, who was appointed by McAuliffe in January 2015, thinks it is too difficult for a voter to answer the simple questions “Are you a citizen of the United States of America?” and “Have you ever been convicted of a felony?” Because of the evidence that noncitizens are registering and voting in our elections, the citizenship question was added to the federal voter registration form by the federal Help America Vote Act (HAVA) of 2002.

Every vote cast illegally by a noncitizen or by an individual who is ineligible for some other reason such as a felony conviction negates the vote of an eligible voter. The Virginia government should be acting to protect the votes of eligible citizens, rather than shielding illegal voters from detection or prosecution. But the latter is exactly what Governor McAuliffe and his appointees on the Board of Elections will be doing if this change is made.

Why are they doing this? Perhaps it has something to do with a recent report on the huge influx of immigrants into Virginia that appears to be turning the state blue, since a majority of foreign-born residents favor the Democratic Party. The same is true for felons: Felons vote overwhelmingly for Democrats. Or perhaps McAuliffe, et al. have in mind the report released last year by three professors from two Virginia universities that estimated, based on survey data, that 6.4 percent of the noncitizen population voted illegally in the 2008 election, enough to have changed the outcome in a number of states, including North Carolina.

Governor McAuliffe and Chairman Alcorn seem to be more concerned with guaranteeing that noncitizens and felons can continue to vote illegally than with protecting the security and integrity of Virginia’s elections.