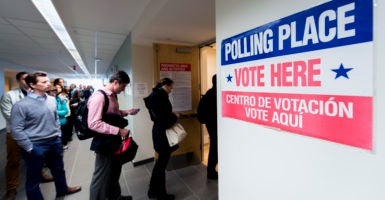 More than 1,000 noncitizens registered to vote in Virginia and cast nearly 200 ballots in elections before being purged from voter rolls, according to a government watchdog group.

The Public Interest Legal Foundation released its findings Tuesday from only eight of Virginia’s 133 voting jurisdictions. So, the group suggested, the problem of noncitizen voting could be more widespread.

“Virginia election officials don’t seem to care that thousands of ineligible aliens have corrupted their voter rolls by illegally registering to vote,” Adams said in a written statement. “Even worse than doing nothing about it, they are trying to cover it up.”

Virginia has been a battleground state in recent elections. Two races for state attorney general—in 2005 and 2013—were determined by fewer than 1,000 votes statewide. So, voter fraud opponents argue, even a few illegal votes can carry a lot of weight.

In our small sample of just eight Virginia counties who responded to our public inspection requests, we found 1,046 aliens who registered to vote illegally.

The problem is most certainly exponentially worse because we have no data regarding aliens on the registration rolls for the other 125 Virginia localities. Even in this small sample, when the voting history of this small sample of alien registrants is examined, nearly 200 verified ballots were cast before they were removed from the rolls. Each one of them is likely a felony.

The report asserts that the Virginia State Board of Elections, the panel that oversees the state’s Department of Elections, directed local election officials not to provide information to the legal foundation.

The Department of Elections did not respond to phone messages and email inquiries Tuesday from The Daily Signal.

The Public Interest Legal Foundation sought information from 19 cities and counties in the state, but got the data from only eight.

In the eight jurisdictions that provided us with lists of aliens recently removed from their voter rolls, we discovered that 31 noncitizens had cast a total of 186 votes between 2005 and 2015. The most alien votes were cast in 2012 followed by 2008, the year President Obama was elected to his first term.

The report goes on to criticize the state’s lack of verification for citizenship in voter registration:

There is plenty of blame to go around. One culprit, however, is glaringly obvious—federal and state voter registration forms, which ask registrants to affirm their citizenship with nothing more than the check of a box. No documentary proof of citizenship must be shown. It is nothing more than an honor system, one that is unquestionably failing to keep noncitizens from voting.

Alexandria General Registrar Anna Leider, who is in charge of elections and voter registration in the city, previously told The Daily Signal that the city provided the Public Interest Legal Foundation with all the information required by law.

After it cleans the voter rolls, Leider said, a jurisdiction is not required to check for past voting activity—whether the name removed is a noncitizen, someone who died, or someone who moved outside the jurisdiction.