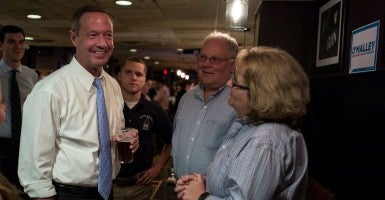 Former Maryland Gov. Martin O'Malley, who opposes the death penalty and supports the right to to vote for people who have felony records, discussed criminal justice reform in Iowa. (Photo: CJ GUNTHER/EPA/Newscom)

O’Malley, a Democrat running for president, would like to make greater investments as a nation “to make sure people are represented in all of our legal processes.”

“What works to save and redeem lives?” is the question O’Malley poses when approaching these issues.

He wants to expand re-entry programs and drug treatment for inmates.

O’Malley also would like to see reforms in policing.

He wants improvement in “how we police the police” through things such as civilian review boards.

Every department and civilian authorities need to “be ahead of the curve” on openness, accountability, and transparency, he said.

As governor of Maryland, O’Malley helped implement statewide goals to reduce violent crimes in his state. During his time as mayor of Baltimore before becoming governor, community-police relations were improved, he said.

He used examples from Maryland during his time in office, saying the incarceration, recidivism, and violent crimes rates all were reduced.

“Our formula…was that we would take actions, not words, but actions, to include more of our people more fully in the economic, social, and political life of our country,” O’Malley said.

O’Malley also wants to make sure that the minimum wage is raised above the poverty line.

He wants people to be able to join labor unions with more ease.

He would like family leave for employees to be expanded and “as a nation move to paid family leave so that women can participate more fully in the economic life of our country.”

In a plan for a clean energy future, O’Malley addressed “promising technologies” such as, “the next generation of safer, cleaner, nuclear energy.”

O’Malley said the first job of the president of the U.S. is protecting its citizens.

“We have to craft a new foreign policy of engagement and collaboration with like-minded people around the world. I believe we need a new national security strategy that creates new alliances to identify and work together to mitigate threats before they arise to a level where it seems like the only option is military boots on the ground or not.”

Supporting the Iran nuclear deal, O’Malley admits, “that means we have to commit ourselves as a nation to make sure it’s monitored, make sure it’s policed.”

“I believe we’re a strong enough country to give peace a chance.”