The Double Murder of Otto Warmbier 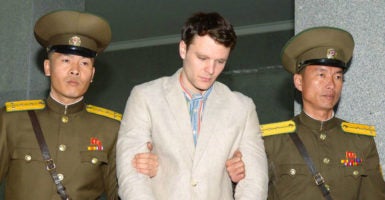 Otto Warmbier died on June 19 from injuries sustained in a North Korean prison, just days after having been retrieved by U.S. officials. (Photo: Kyodo/Newscom)

We may never know what brutal torture and malign neglect American student Otto Warmbier suffered at the hands of North Korea’s dictatorship before losing his life this week at the age of 22.

But it wasn’t the first time the free-spirited Ohio native died.

More than a year before succumbing to the unknown illness or injury that left him in a coma thousands of miles away from home, Warmbier’s own countrymen murdered his reputation. His character. His humanity.

Click-hungry media ghouls knew nothing about Warmbier’s small-town upbringing, his family life, politics, personality, disappointments, or dreams. But they gleefully savaged a young man who made a mistake on a doomed trip to a totalitarian hell.

Warmbier’s thoughtless taunters instantly transformed him into a bigger, badder villain than the barbaric Democratic People’s Republic of Korea goons who beat, starve, rape, and kill enemies of the state for such offenses as listening to foreign radio broadcasts, possessing Bibles, and disrespecting Dear Leader—in Warmbier’s case, by attempting to steal a propaganda sign that read, “Let’s arm ourselves strongly with Kim Jong-il’s patriotism!” as a souvenir.

She rejoiced at Warmbier’s sentence because, she gloated, it taught him that “the shield his cis white male identity provides here in America is not teflon abroad.”

Instead of faulting a repressive socialist regime, La Sha blamed Warmbier for “being socialized first as a white boy, and then as a white man in this country.”

The Huffington Post’s megalomaniac millennial had the gall to compare her daily plight of living and breathing freely in America to Warmbier’s captivity:

The hopeless fear Warmbier is now experiencing is my daily reality living in a country where white men like him are willfully oblivious to my suffering even as they are complicit in maintaining the power structures which ensure their supremacy at my expense.

For a few cheap yuks, liberal black comedian Larry Wilmore plowed ahead with smug disregard to how Warmbier’s parents, family, and friends must have suffered as photos and videos of their son and loved one were plastered all over media.

To canned laughter, Wilmore mocked Warmbier on his Comedy Central show with a graphic labeling him an “ASS,” which spelled out a fake frat name, “Alpha Sigma Sigma.”

“It’s just tough for me to have much sympathy for this guy and his crocodile tears,” Wilmore snarked as he roasted the “Frat Boy.”

This might be America’s biggest idiot frat boy: Meet the [University of Virginia] student who thought he could pull a prank in North Korea.

Not to be outdone, Affinity Magazine (a “social justice” online magazine for teens) stomped on Warmbier’s grave after his death was announced:

“Watch whiteness work,” the publication tweeted. “He wasn’t a ‘kid’ or ‘innocent’ you can’t go to another country and try to steal from them. Respect their laws.”

This from a rag that had deified Black Lives Matter icons Michael Brown and Trayvon Martin as downtrodden youth whose extensive rap sheets must remain unmentioned at all costs.

Warmbier’s saboteurs engaged in the very same bigotry and stereotyping they recklessly accuse everyone else of at every turn.

The far left learned nothing from leaping to conclusions about the Duke lacrosse players or the wrongfully accused members of Phi Kappa Psi at University of Virginia—where Warmbier was a junior double-majoring in commerce and economics.

By all accounts, Warmbier was a charismatic and caring human being whom one high school classmate called “everyone’s friend.”

He was a lover of cultures and intellectually open-minded—”a warm, engaging, brilliant young man whose curiosity and enthusiasm for life knew no bounds,” according to his family.

Utterly consumed by malignant identity politics, the left-wing intelligentsia have become the intolerantsia. They are bent on dehumanizing individuals; fomenting racial, ethnic, and class division in the name of “progressivism;” and never taking responsibility for the damage done.

Contrast the no-regrets policy of these “Frat Boy” bashers with a former North Korean prison guard, Lim Hye-jin, who escaped recently and recounted the horrors of life in the camps.

“We were manipulated not to feel any sympathy for prisoners,” she said. The guards of the totalitarian state “do not see them as human beings, just as animals.”

After realizing she had been brainwashed by ideological monsters, she spoke out.

“Now I know they were normal people, so I feel very guilty.”

Will the short, slandered life and double death of Otto Warmbier prompt the American left’s cruel character assassins to admit the same?