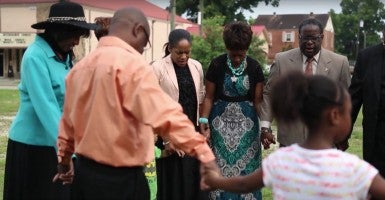 The City of Houston is threatening to bulldoze the historic Christian Fellowship Missionary Baptist Church and condemn the property of the Latter Day Deliverance Revival Center. (Photo: Liberty Institute)

The Houston Housing Authority found itself in the middle of a sticky lawsuit this week when the agency tried to use eminent domain to “steal” two historic churches’ property as part of an urban renewal project.

A Texas attorney representing the two churches is alleging that the city intended to use some of that property to build a for-profit business.

“[The Houston Housing Authority] wants to steal these churches, bulldoze them and use them for a parking lot for a doctor’s office,” said Hiram Sasser, a Texas attorney for the Liberty Institute representing the churches. “It’s shameful.”

The Houston Housing Authority disputes Sasser’s account, stating the agency never attempted to “steal” these churches in the first place.

Instead, it claims it sought two vacant parcels owned by one of the churches, the Latter Day Deliverance Revival Center.

“We had not begun any eminent domain process against any church building,” Tory Gunsolley, president and CEO of the Houston Housing Authority, told The Daily Signal. “All we had done was eminent domain on what originally was two vacant parcels.” The Latter Day Deliverance Revival Center and the Christian Fellowship Missionary Baptist Church are located in the Fifth Ward neighborhood, which is known for its history of violence and crime. (Photo: Liberty Institute)

Gunsolley says the Latter Day Deliverance Revival Center has refused to negotiate with the city to sell its property.

Sasser, the lawyer representing the churches, said that’s because the Latter Day Deliverance Revival Center had bigger plans for the property.

Piece by piece since 1965, Sasser said the Latter Day Deliverance Revival Center had been collecting property around their church to expand.

“Every time there was a piece of property becomes available for sale, they buy it,” he said. “They’re doing it the old-fashioned American way where it takes a couple of decades. They didn’t ask the government to go steal it from somebody and give it to them.”

In the lawsuit, Latter Day Deliverance Center claims that it uses this land for ministry activities such as setting up youth centers, food pantries and providing education assistance to the community.

The Houston Housing Authority, however, saw an opportunity to use that “undeveloped” property for a greater public good.

Gunsolley maintains that public good isn’t a for-profit medical center, but rather an affordable housing project.

Yet Gunsolley did acknowledge that the idea to build a medical center on the church property was featured in a proposal drawn up by the Fifth Ward Community Redevelopment Corporation.

The Houston Housing Authority works with this organization, he said, but the housing agency “had nothing to do with that other than we were there at a table as people were talking about it.” The Latter Day Deliverance Revival Center was formerly an abandoned movie theater on one side and a night club on the other. (Photo: Liberty Institute)

To obtain this property, the Houston Housing Authority began the eminent domain process in March, after it became clear that Latter Day Deliverance Revival Center was refusing to leave.

Gunsolley says the Housing Authority has pursued only lots located “across the street” from the physical church building, but not the church itself. He said the city can’t move forward with the renewal project without securing this “strip” of land.

“We can’t work around the Latter Day Deliverance Revival Center church alley strip down the center of the parcel, and that’s why we had to use eminent domain,” he said.

Gunsolley insists that the Housing Authority has not yet started the eminent domain process on the second church, Christian Fellowship Missionary Church, which is on the same city block as Latter Day.

In fact, until this week, Gunsolley was under the impression that the owner of Christian Fellowship Missionary wanted to sell.

“It was a shock to see the videos and the narratives out there,” he said of the allegations that have come about as a result of the lawsuit. “We haven’t taken any steps toward them to take their church.”

Sasser, who is in close communication with the church leaders, accused the city of “trying to bully the elderly” in negotiating deals with Christian Fellowship’s 73-year-old pastor “while he was having bad health.”

“It’s distasteful,” Sasser said. “You would think if they’re being so fair and it’s such a great thing for the community, that they wouldn’t have to go around making side deals.”

Bishop Kossie, who has served as a pastor in the Fifth Ward for over sixty years, says, “This is our home. This is where the Lord called us to serve and this is where we want to stay. We aren’t giving up without a fight.” (Photo: Liberty Institute)

In the lawsuit, Sasser argues that the city’s plans to use eminent domain on the churches’ properties violate their rights as defined by the Texas Religious Freedom Restoration Act and the Texas Constitution.

Under eminent domain, the government can seize property for economic development so long as it’s for a “public use.”

By appealing to the state’s Religious Freedom Restoration Act, Sasser raises the bar for the Houston Housing Authority to justify taking the churches’ property.

The Texas Religious Freedom Restoration Act ensures that “a government agency may not substantially burden a person’s free exercise of religion [unless it] demonstrates that the application of the burden to the person … is in furtherance of a compelling governmental interest [and] is the least restrictive means of furthering that interest.”

“They’ve got to meet the [Religious Freedom Restoration Act] standard and there’s no way they’re going to meet it,” Sasser said.

Over the years, the church developed outreach programs to provide food and minister to drug addicts, alcoholics and gang members. (Photo: Liberty Institute)

If the court accepts this argument and the city is unable to meet the Religious Freedom Restoration Act standards, the Houston Housing Authority could be forced to withdraw from the restoration project completely.

The sad thing is, if the outcome is, they win, then I think that block is going to stay decrepit for the foreseeable future. [The churches] haven’t made any progress on executing a vision on redeveloping that block. Most of the houses are in extreme disrepair. It needs help and it needs investment, and we are trying to invest in that community.

Sasser sees it differently, and he believes that the churches have had an extraordinary impact on the community.

They’re very proud of their neighborhood, they’re very proud of their efforts, and they should be. They’ve done a great job of turning things around. They did such a great job in turning things around that the city of Houston is coming along and saying, ‘Gee, we’ll take it from here. Thank you so much for cleaning this area up. It does look quite valuable. Thank you so much for doing the hard work for us even though we weren’t going to lift a finger one bit to help you along the way beforehand.’

Both sides will appear before a hearing in two weeks, where a court will decide if the Houston Housing Authority will be allowed to move forward and take control of the churches’ property.