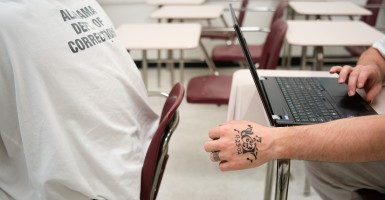 Inmates at Alabama Therapeutic Education Facility prepare to take their GED test. The privately-run prison aims to “break the cycle of recidivism.” (Photo: Bob Miller for The Daily Signal)

It used to be that, like entitlement spending, criminal justice reform was a third rail in politics—touch it, and you could be sure that your next opponent would run a commercial saying you were “soft on crime.”

It was a one-way ticket to “Loserville.”

That has changed, most notably in conservative states. Listen to what some politicians are saying now.

In the last six years, Texas’ incarceration rate has fallen by 10 percent, and crime has dropped by 18 percent.

Among its many reforms, Texas has embraced specialized courts, such as drug courts, which have dockets that focus on targeted groups of offenders sharing certain common characteristics.

In a recent interview, former Gov. Rick Perry stated, “now we’ve expanded [courts] into prostitution courts and veteran courts and a lot of ways, gives the courts the flexibility to deal with nonviolent drug-related events.”

He added, “That’s not to say that the people didn’t make a mistake, that they weren’t going to be punished for it, but we’re not going to throw them in jail and throw away the key.”

During his first term, Gov. Nathan Deal of Georgia initiated some bold criminal justice reforms and proudly touted those efforts during his re-election campaign. Deal made it quite clear during his second inaugural speech that he was not content to rest on his laurels when he stated:

In Georgia, we have taken monumental steps in recent years to give nonviolent offenders a new beginning. As a result, our alternative courts are paying dividends for offenders, their families and taxpayers.  … For those who are already in our prison system, many of them now have the chance for a new beginning too. Approximately 70 percent of Georgia’s inmates don’t have a high school diploma. If their lack of an education is not addressed during their incarceration, when they re-enter society they have a felony on their record but no job skills on their résumé. I am here to tell you, an ex-con with no hope of gainful employment is a danger to us all. This is why we must work to get these individuals into a job. Our prisons have always been schools. In the past, the inmates have learned how to become better criminals. Now they are taking steps to earn diplomas and gain job skills that will lead to employment after they serve their sentences. … Our message to those in our prison system and to their families is this: If you pay your dues to society, if you take advantage of the opportunities to better yourself, if you discipline yourself so that you can regain your freedom and live by the rules of society, you will be given the chance to reclaim your life. I intend for Georgia to continue leading the nation with meaningful justice reform.

Alabama Gov. Robert Bentley, who signed a criminal justice reform bill into law, recently told Congress, “I believe that our prison reform efforts have created a healthy foundation that can, over time, transform the landscape of the entire criminal justice system for the better.”

>>>Read The Daily Signal’s ongoing series for more information about Alabama’s efforts to ease its overcrowded prisons. How Overcrowding Has Forced Alabama to Confront Its Prison Problem “We pledged to Mississippians that we would make this the ‘public safety session’, and we have worked hard to develop this ‘Right on Crime’ research-based plan that is tough on crime while using resources wisely where they make the most impact.”

I could go on and cite similar statements from other conservative governors, but you get the point: Attitudes towards criminal justice reform have shifted dramatically.

Necessity being the mother of invention, governors in red, blue and purple states began thinking that there might be smarter ways of addressing their prison systems—ways that would lower costs and might even enhance public safety—and about whether there might be sensible alternatives to incarceration for some categories of offenders.

Others are studying the results of those efforts and are considering embarking on their own reform efforts.

Financial costs were not the only reason why states undertook this effort. Perhaps of even greater significance, there is the human cost to consider.

The family members of offenders, particularly children, also suffer when a loved one is imprisoned.

Parents who commit crimes may not be the best role models, but they are usually better than having no role model at all.

Many studies indicate that children with incarcerated parents struggle and often end up turning to crime themselves.

Conservative governors have focused on the fact that roughly 95 percent of those who are incarcerated will eventually return to our communities, and that we ought to see if there are things that can be done while these offenders are still incarcerated to address the problems these prisoners will likely face once they are free.

Currently, many offenders have substance abuse problems, or a lack of education or jobs skills, making them more likely to recidivate and pose a continuing threat to public safety once they have been released. Governors are encouraging offenders to participate in evidence-based programs designed to address their particular needs.

Governors are also starting to address important issues like mens rea reform and collateral consequences, which are the myriad of legal disabilities that accompany a criminal conviction that can make it difficult for an ex-offender who has been released from prison to earn a livelihood or remain in a stable environment.

In a recent report, The Pew Charitable Trusts found that over a five-year period (from 2008 to 2013), the ten states that instituted reforms and cut their imprisonment rates the most experienced greater drops in crime (13 percent average crime rate reduction) than the ten states that increased their imprisonment rates the most (8 percent average crime rate reduction).

Of course, every state is different, and some anomalies exist. What this demonstrates, however, is that we should no longer take it as a given that simply putting more offenders away for longer periods of time is the only—or even the best—way of reducing crime in our communities.

These efforts, of course, are ongoing. Some of these reforms are controversial, and not all of them will work.

If some of these experiments prove unsuccessful, legislators can always return to their old way of doing things.

After all, with the exception of alleviating prison overcrowding, these changes are not constitutionally required. That having been said, it should be noted that the results of many of these reforms look very promising.

If you don’t believe me, just ask a conservative governor.