Is the Fed Worth It? House Republicans Want to Find Out 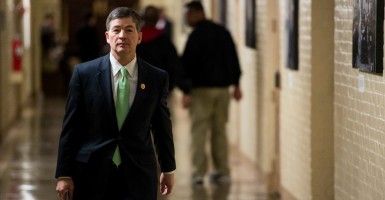 Two Texas Republicans are pushing to examine the effectiveness of the Federal Reserve’s monetary policies.

The House Financial Services committee, led by Chairman Jeb Hensarling, R-Texas, passed legislation last week that would create an independent, bipartisan commission to evaluate the Federal Reserve’s impact on the U.S. economy over the past 100 years.

Congress created the Federal Reserve in 1913, but has never comprehensively assessed its effectiveness.

Economists are divided on how efficient the Federal Reserve has been.

One side argues the Federal Reserve serves the economy best when using its authority to create monetary policy, which is how the bank has operated since it began.

The other side argues the economy would expand and job creation would grow if the Federal Reserve were constrained by rules.

“Without a binding rule, a discretionary central bank will always give us higher inflation without any gain in employment,” said Norbert Michel, a research fellow in financial regulations for The Heritage Foundation. “Rules-based monetary policy would also help to prevent short-term political considerations from interfering with the Fed’s long-term goals.”

The commission would deploy bipartisan review of the Federal Reserve’s performance over its 100 years of operation, empirically evaluating the legitimacy of the two arguments and provide Congress with impartial, non-binding recommendations on how best to continue with Fed policies.

Michel said this is important because it allows Congress to assess whether or not the Federal Reserve’s policies have worked in the past.

“The conventional wisdom is that the Fed’s done a great job, especially since the 1980s, but there’s a lot of high quality research that shows that the pure discretionary monetary policy at the Fed hasn’t been that terrific,” Michel said. “It’s really hard to get people in Congress to listen to that, so the commission would be a great vehicle for that.”

The bill, named the Centennial Monetary Commission Act of 2015, passed the committee 35-22. Only one Democrat voted for the legislation.

Hensarling spearheaded similar legislation in 2013, saying the committee would “reexamine all conventional wisdom dealing with the Federal Reserve” without “preordaining the conclusion.” His legislation failed in committee, but Hensarling and several other key members—including Reps. Mick Mulvaney, R-S.C., and Bill Huizenga, R-Mich.—have made Federal Reserve reform a priority.

The bill is expected to move to the House floor for a vote in September once the Congress returns from August recess.